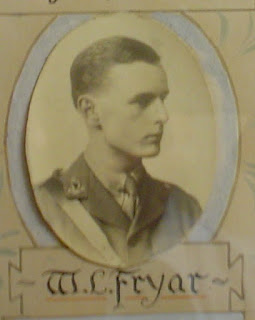 He was the son of Samuel Fryar BA and Letitia Elizabeth Fryar.  In 1901 the family were living in house 86, Scarva Street, Banbridge.  By 1911 the property was known as house 65, Scarva Street, Banbridge.
On 23rd August 1911, Fryar joined Northern Bank in Head Office.  He was of Church of Ireland faith.  Transfers followed with Castlewellan (1913), Head Office (1913) and Clones (1914).

On ‘Ulster Day’, Saturday, 28th September 1912, Clarke signed the Ulster Covenant at Banbridge Orange Hall giving his address as Primrose Villa, Banbridge.
Whilst based in Clones branch, on 1st January 1915, aged 21, Fryar volunteered and enlisted into the Royal Naval Aviation Service (Armoured Cars).  He was gazetted as a 2nd Lieutenant with the 17th Bn. Royal Irish Rifles, transferred into the Machine-Gun Corps, serving with the British Expeditionary Force eventually being promoted to Lieutenant.

The Northern Banking Company 1924 Centenary Volume describes him as a Petty Officer.
Further action was seen in the Somme 1916, Ypres 1917 and Cambrai 1917 before being demobilised in January 1919.  Fryar was awarded the British Victory Medal and the British War Medal.
Following demobilisation, he rejoined the Northern Bank at Head Office on 17th February 1919.  He was transferred to Royal Avenue in the same year, Donegall Square (1927), Dungloe (1928), Bangor (1933) and Omagh (1941).

In 1919, he married a Miss Taylor who also worked in Royal Avenue branch.   They had 3 children, one surviving and living in Switzerland and well into his 80's.

On 26th March 1922, Seapatrick Parish Church honoured the dead of the Great War with the dedication of a stained glass window. Around 200 ex-servicemen paraded with Lieutenant W L Fryar amongst other officers.
Posted by Gavin Bamford