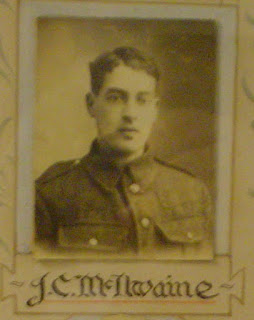 He was the son of James McIlwaine and Annie McIlwaine (nee Condy).  They had married on 15th May 1890 at Great Victoria Street Presbyterian Church.

In 1901 the family are recorded as living in house 123, West Division, Carrickfergus, Co. Antrim.  He was of Presbyterian faith being a member of Joymount Presbyterian Church.

By 1911, the family have moved to house 8, North Street, Carrickfergus, Co. Antrim. James is recorded as a Bank Official.

Whilst in Coleraine, McIlwaine aged 21 volunteered and enlisted on 15th September 1914 into the 12th Bn. Royal Irish Rifles (RIR) as a Private.  His Service Number was 12/18305.

He joined the British Expeditionary Force and was promoted first to Lance Corporal and then to Corporal. Service was seen in the Somme 1916, Messines 1917, Ypres 1917 (Langemarck), St. Quentin 1918, Mesines 1918 (Kemmel) and then the Allied Advance 1918.


Demobilisation came in February 1918.  He was awarded the 1914/15 Star, the British Victory Medal and the British War Medal.


McIlwaine is named on the Roll of Honour in the New Row, Coleraine Presbyterian Church.  He is also recorded on this website Carrickfergus Roll of Honour. where he is recorded as achieving the rank of Company Sergeant Major.  The site also records him as being taken prisoner at the Somme in July 1916.

In early 1919, James married.  The records in Ancestry record three women present:  Mary Courtney. Lizzie McGee and Agnes Manson.  It is unclear which was the fiance.