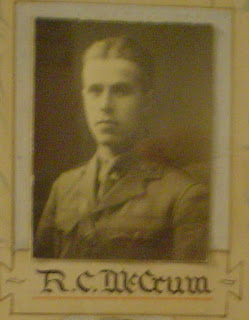 Whilst based in Londonderry, McCrum aged 23, volunteered and enlisted on 15th December 1915 into the Cadet Company, 19th Bn. RIR as a Private.  He was Gazetted as a 2nd Lieutenant and posted to the 19th Bn. RIR.  He joined the British Expeditionary Force, was then posted to the 10th Bn. Royal Irish Rifles, then transferring to the 1st Bn. Royal Irish Rifles as a Lieutenant.  Service was seen in Messines 1917, Ypres 1917, St. Quentin 1918 and the Allied Advance 1918.  McCrum was injured once with a gunshot wound.

Demobilisation came in January 1919.  He was awarded the British Victory Medal and the British War Medal.
On 25 October 1921, a Temporary Lieutenant R C McCrum was gazetted and retained the rank of Lieutenant in the Royal Ulster Rifles.
Following demobilisation, McCrum rejoined the Northern Bank on 22nd February 1919 at Londonderry.  Transfers followed to Omagh (1932) and Kilrea (1941).

Alan McCrum, a descendent of R C McCrum attended the 2000 re-dedication ceremony of the Rolls of Honour.
Posted by Gavin Bamford