He was the son of Hugh Alexander Quail and Josephine Quail.   In 1901 the family were living in house 15, Clontivrin, Clonkeelan, Co. Fermanagh.   The father is recorded as a Bank Cashier probably with the Bank of Ireland.   By 1911 the family have moved to house 47.2 High Street, Portadown, Co. Armagh.   His father is described this time as a Bank Official.

On 28th September 1912, a Hugh Quail signed the Ulster Covenant at Armagh giving his address as 4 Barrack Street, Armagh.

Quail would have joined the Belfast Banking Company around 1914 working in Markets.

Quail served with the 10th Bn. Royal Irish Rifles and attained the rank of 2nd Lieutenant.

The Belfast Banking Company 'Roll of Honour' booklet records Quail as having been 'previously wounded' with his last known address 'in France'. 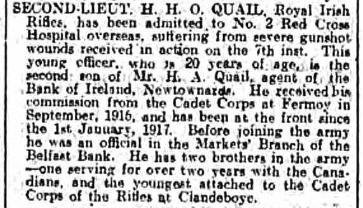