At one stage, he lived in Harrow, Middlesex.

By 1911, the family are recorded as living in house 29.1 Antrim Road, Clifton Ward, Belfast.  Plunkett describes his occupation as a Bank Clerk.
Educated at the Belfast Royal Academy, Hogarth joined the Belfast Banking Company and served in Western and Portadown branches.
Hogarth volunteered and enlisted into the army as a Private with Service Number 75307.
He was serving with 7th Signal Company, Royal Engineers as a Despatch Rider with the rank of Corporal when he was killed in action on 13th May 1917.  Hogarth is buried in the Vraucourt Copse Cemetery, Vaulx-Vraucourt, Pas De Calais, France. 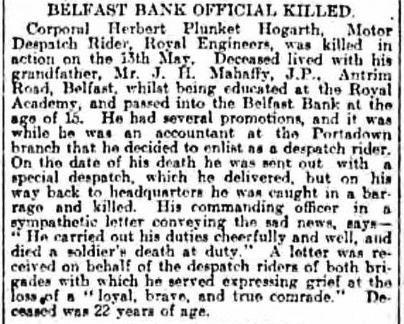 Hogarth was awarded the 1915 Star, British War Medal and the Victory Medal.