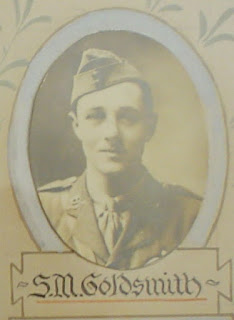 Goldsmith was a member of Lisnagarvey Hockey Club.

Goldsmith joined Northern Bank in 1914.
He was based in Dromore branch when he enlisted into the Duke of Wellington's (West Riding) Regiment.  He served with the British Expeditionary Force and then transferred into the RAF eventually being promoted to 2nd Lieutenant.  Goldsmith saw action in Arras 1917, Ypres 1917 and Cambrai 1917.  He received a gunshot wound.  His Army Number may have been PI 14281 or PS/6331.
The Belfast News Letter of 23rd April 1917 reports:

In late 1918, Goldsmith transferred to the Central Flying School, Upavon.  In November 1918, he was promoted to Lieutenant.
Demobilisation came in May 1919.  His war record documents describe this event as 'Trans(ferred) unemployed list 4/5/19'.

Goldsmith was awarded the 1914/15 Star, the British Victory Medal and the British War Medal.

The London Gazette records his career as 2nd Lieutenant (1916), Acting Pilot Officer – RAF with Service Number 76060 (1939), Pilot Officer (1940), Flight Lieutenant and Squadron Leader (1944). He relinquished his commission in 1954 and was permitted to retain the rank of Wing Commander. He may also have been awarded an OBE.
On 20th February 1945 a Canadian Patent was issued for an ‘Aircraft Pilot Training Apparatus’.  The inventors are named as George Edmund Hill and S M Goldsmith.
Posted by Gavin Bamford