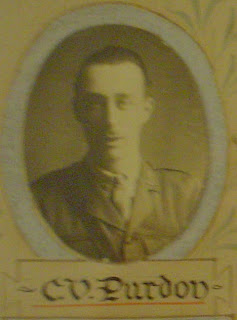 He was the son of James Theodore Purdon and Charlotte Amelia Purdon.   James is recorded as a Bank Manager.   In 1901, the family were living in house 6, Quinsboro Road, Bray, Co. Wicklow.   The family were of Church of Ireland faith.

Whilst based in Head Office, Purdon volunteered and enlisted on 20th November 1915 (aged 24) into the North Irish Horse as a Trooper.   He was gazetted as a 2nd Lieutenant with the 18th Bn. Royal Irish Rifles before joining the British Expeditionary Force.   Later he was posted to the 12th Bn. Royal Irish Rifles. Service was seen in St. Quentin 1918.

Purdon was injured once; a gunshot wound.

The Belfast News Letter of 9th May 1918 reports:

Purdon was awarded the British Victory Medal and the British War Medal.  His correspondence address was 33 Wellington Road, Dublin.


A relative (see comments) advises that Purdon lived in Kilkeel until he died.