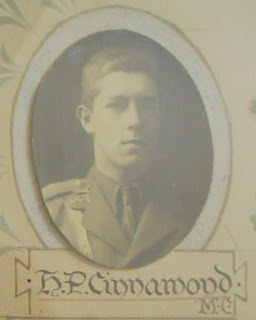 Hubert was the son of James Park Cinnamond and Isabella Witherspoon Cinnamond.  In 1901 the family lived in house 2, Shore Road, Cushendall.  James is recorded as a Bank Manager.  By 1911, the family have moved to house 5, The Square, Comber.  He is recorded as being of Church of Ireland faith.
On 26th July 1912, Cinnamond joined Northern Bank at Head Office.  A transfer to Falls followed in 1914 and then back to Head Office.
On 10th May 1915, whilst based in Head Office, Cinnamond volunteered and enlisted into the Prince of Wales Own (West Yorkshire) Regiment.  He saw service with the British Expeditionary Force and was transferred into the 150th Indian Infantry, 43rd Erinpura Regiment, Indian Army.

The Belfast News Letter of 8th May 1915 reports: 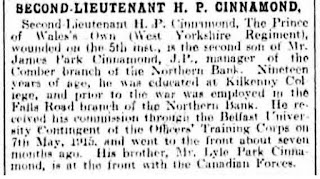 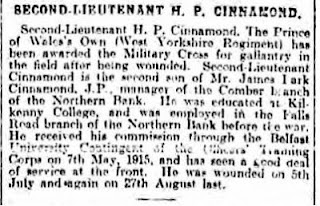 The Belfast News Letter of 15th November 1916 reports the awarding of the Military Cross to Cinnamond:

He was Mentioned in Despatches on 14th November 1916.

The Belfast News Letter of 5th May 1917 reports: 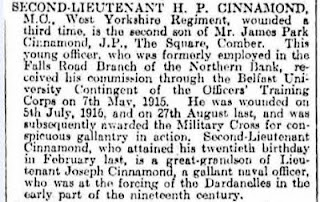 Promotion followed to Lieutenant in October 1917 and Captain in April 1918.  Cinnamond saw service in Mesopotamia, Afghanistan, Somme 1916 and Araas 1917.  His injuries included being shot twice and being gassed.
He was demobilised in December 1919 having been awarded the Military Cross (MC), the British Victory Medal and the British War Medal.
The London Gazette records an H P Cinnamond as resigning his commission on 4th January 1920.  It also records a Major H P Cinnamond MC (Service Number 59524) as having attained the age limit of liability to recall and relinquishes his commission on 13th January 1947 when he was granted the honorary rank of Major.
An article entitled “Stirring Times Upon the North-West Frontier of India by H.P.Cinnamond” appeared in the ‘Australian Boys Annual’.  At one stage, he was ‘in the Indian Army.
On ‘Ulster Day’, Saturday, 28th September 1912, Eileen Cinnamond and Olive Cinnamond (sisters of Herbert Park Cinnamond) of the Bank House, Comber signed the Women’s Ulster Declaration (Covenant) at The Square and Houses, Comber.

Also see the comments below added by the grandson of H P Cinnamond. 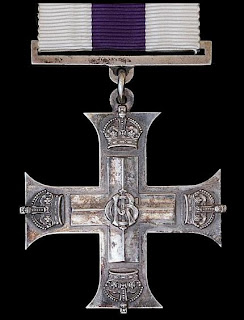