Flight Lieutenant John Black
was born on 14th August 1920.  His father was John Black Senior (father) of Portstewart – Farmer
Black joined Belfast Banking Company in 1939 and was the ‘junior’ in Limavady branch. 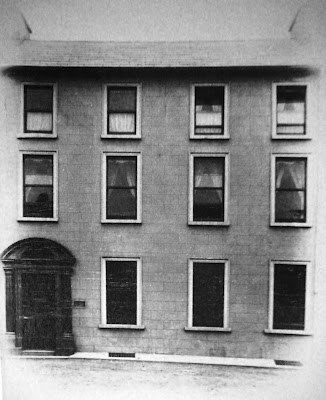 
He left the Belfast Banking Company for War Service on 5th June 1939.
Black’s son records in 2012 the following about his father:
“At the outbreak of WW2 my father was a “junior” in the Belfast Banking Company in Limavady.  He joined the Home Guard, but felt a little left out of things as “everybody else was in uniform”.  He considered the army but didn’t want to be a footslogger.  He considered the Navy but didn’t want to be seasick, so he volunteered for the RAF in 1943.  He was sent to Canada April 1944 for Navigator/ Bomber training at Malton, Ontario (now the airport for Toronto).  Graduated top of his class (Air Bomber Course 100) and was presented with the Dominion Trophy, given by Dominion Airways.  This is a silver ashtray which he always said was one of his proudest possessions. He also was asked to sign a propeller in the Officer’s Mess.  I have tried in vain to trace this but no one seems to know anything about it.  It is probably located in some RCAF archive somewhere.  He returned across Atlantic on Queen Elizabeth as “senior” RAF officer on board. He had been an officer for about six days and outranked his friend Bert Baillie by ten minutes.  He recalled rounding Malin Head and instead of looking for German Bombers he used the ships binoculars to view the home farm of Garborgle outside Portstewart.  He was posted to Wigtown in Scotland.  He spent time in Coastal Command looking for Submarines and downed aircraft.  Transferred to Kinloss where he did more Bomber training and converted from Ansons to Wellingtons.  Transferred to 1651 Conversion Unit Woolfox Lodge in Yorkshire where he converted to Lancasters and upgraded to night flying and fighter affiliation.  They flew in all weathers and quite a number of his friends were killed in training.  As far as we are aware he never actually dropped any bombs in anger but his crew seriously bent several aircraft.  He interpreted his flight log book for me.  One entry said “Bit bumpy at 10,000 ft” what that meant was that they turned a 4 engined heavy bomber upside down in a thunderstorm and after calling “mayday” had to return to base.  The plane never flew again.  War ended before he actually was required to night fly over Germany and he was transferred to the RAF School of Accountancy and was a paymaster in Northern Ireland before being demobbed and returning to the Belfast Banking Co. Ltd in Ballymoney”.
Following his return from Active Service, he was transferred to Ballymoney on 15th April 1946.  His address is recorded as Coorong, Lodge Road, Coleraine.

He is recorded in the 1966 annual accounts of the Belfast Banking Company as being manager of Ballymena branch.

Black attended the 2000 re-dedication ceremony of the Rolls of Honour. 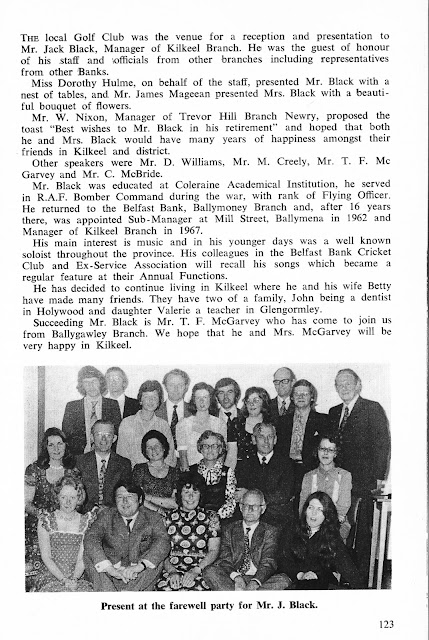