He was the son of Thomas Digby Turpin and Jane Turpin.  In 1901 the family are living in house 1, Lawn View Place, Ballymena.  The father is described as a Bank Cashier.
Turpin would have joined the Belfast Banking Company around 1909.

By 1911 the family had moved to house 39, High Street, Portadown.  Thomas’ occupation is now Bank Manager and Aubrey’s occupation is described as a Bank Assistant.
Turpin served with the 19th Bn. Royal Irish Rifles and attained the rank of 2nd Lieutenant. 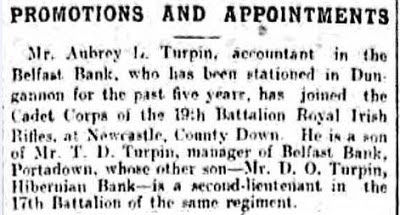 
He later had a daughter, Doreen Elizabeth Turpin.