He was the son of Thomas Heron Keown and Sarah Jane Keown.  In 1901 the family were living in house 7, Rosetta Avenue, Ormeau Ward, Belfast.

Keown would have joined the Belfast Banking Company around 1908.

In 1910, Keown became the local Scoutmaster for the Bloomfield Patrol.

By 1911 the family were living in house 42, Dundela Avenue, Victoria Ward, Belfast. He is described as a Bank Official. 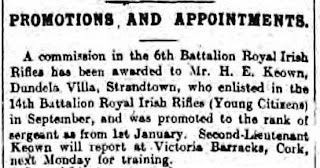 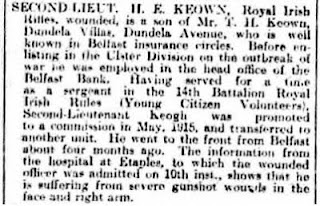 Following his demobilisation after the Great War, Keown returned to work eventually ending up in Central branch.  He also served in Head Office.

In addition to banking, Keown returned to Scouting.  Aidan Campbell in his book, 'Belmont' describes the picture below:

"A later photograph of the 10th Scout Troop  in 1921 in front of a large semi-detached property called 'Dundela Villas' on Dundela Avenue. .... Scoutmaster Harry Keown is sitting in the second row (with moustache and holding dog) outside his family home". 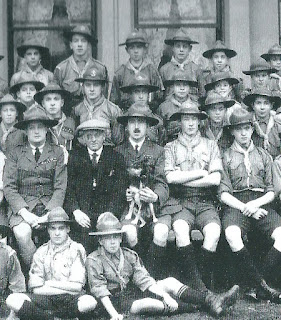 
Keown was a member of the Belfast Banking Company Sports Club on 26th March 1945 paying 5 shillings subscription. In March 1947, he was in Central branch.