He was the son of the late William George Milligan and Elizabeth Milligan, of Ballymascanlon, Co. Louth.

In 1901 the family were living with a Jane McKenney in house 2, Culfore, Ballymascanlon.   Jane is described as the head of family.  William George Milligan and his two children are living with McKenney.

Following his education at the Educational Institute, Dundalk, Milligan joined the Belfast Banking Company and served in Enniskillen and Drogheda branches.

A relation or family friend may have been the Honourable Gertrude Plunkett (*) of Ballymascanlon House, Dundalk.

Milligan volunteered and enlisted into the Leinster Regiment to undertake his training.  His Service Number was 7/2205.

He was serving with the 7th Bn. Royal Inniskilling Fusiliers as a 2nd Lieutenant when he was killed in action on 29th April 1916 aged 19.   Milligan is buried in the Philosphe British Cemetery, Mazingarbe, Pas De Calais, France.

The Belfast News Letter of 11th May1916 reports: 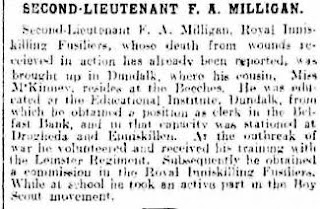 (*) Gertrude (1841-1924) was an Irish aristocrat from Co. Louth.   She was one of six children to Thomas Plunket (1792-1866) a junior Church of Ireland Clergyman who later became the Bishop of Tuam, Killala and Achonry and after his father died became the 2nd Baron Plunket.   Her mother was Louise Jane Foster of Fanevalley, Co. Louth and MP for Dunleer.   She was the granddaughter of William Plunket, Lord Chancellor of Ireland, who became the first Baron Plunket.   Gertrude lived with her sister, Katherine who inherited from her mother one of the family’s ancestral homes, Ballymascanlon House, near Dundalk.

Administration of the estate was granted at Armagh to Susan V McKenney, Spinster.  Milligan's effects were £81 14s 8d.

Milligan is also remembered on the Drogheda War Memorial.  My thanks to John McCormick of the facebook group 'War graves & memorials, Northern Ireland' for the following photograph. 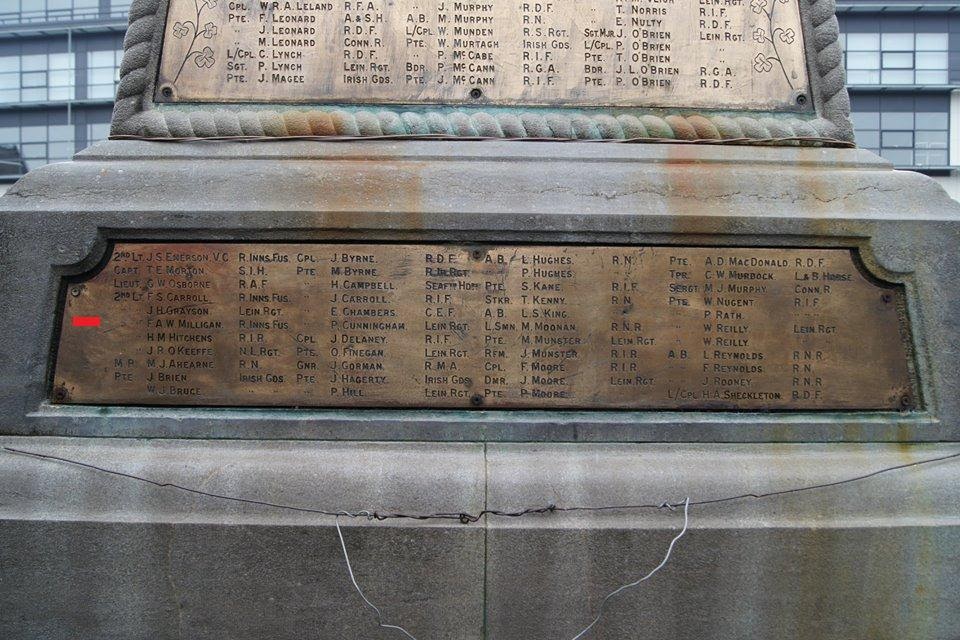