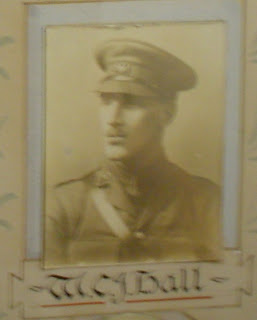 Lieutenant William Cecil John Hall
was born in Lack, Kesh, Co. Fermanagh on 11th June 1893.  He was the son of William and Sarah Hall.  In 1901 the family lived in house 18, Lack Village, Lack, Co. Fermanagh.  By 1911, their property was known as house 25, Lack Town, Lack, Co. Fermanagh.  He was of Church of Ireland faith.
On 18th April 1911, Hall joined Northern Bank at Head Office.  A transfer to Grafton Street followed in that year.
Whilst based in Grafton Street, on 9th September 1914 aged 21, Hall volunteered and enlisted into the South Irish Horse as a Trooper for 1 year or the duration of the war.  He served with the British Expeditionary Force, was promoted through the ranks from Lance Corporal, Corporal, Sergeant, Sergeant Major before being Gazetted as a 2nd Lieutenant in the 4th Reserve Cavalry.  Later, he joined the 6th Inniskilling Dragoons and was promoted Lieutenant.  Hall was injured 3 times; concussion twice and gassed once.  Demobilisation came in June 1919 and he was awarded the 1914/15 Star, the British Victory Medal and the British War Medal.
Following demobilisation, Hall rejoined the Northern Bank on 24th February 1919 at Portadown.  Transfers followed to Head Office – Foreign Department (1920), Lisburn (1927) and Windsor (1934).
Posted by Gavin Bamford