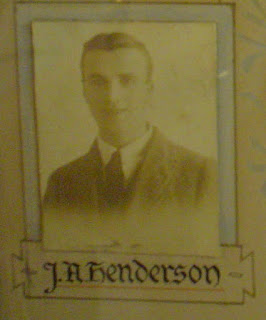 Acting Sergeant James Alexander Henderson
was born in Londonderry on 24th February 1890.  He was the son of James and Elizabeth Henderson.  In 1901 the family resided at house 4, Tamneymore, Tamnaherin, Londonderry.
On 17th April 1906, he joined Northern Bank at Head Office.  He was of Presbyterian faith.  Transfers followed to Ballybay (1906) and Coleraine (1908).  In 1911, Henderson was boarding in house 1, Nursery Avenue, Coleraine, Co. Londonderry.  He is described as a Banker’s Clerk.
Whilst serving in Coleraine branch he enlisted into the 14th Bn. RIR as a Private.  His service was with the British Expeditionary Force before transferring to 290 A E Company.  Promotions to Lance Corporal, Corporal and Acting Sergeant followed.  Henderson saw action in the Somme 1916 (Thiepval) and suffered septic poisoning before he was demobilised in February 1916.  He was awarded the British Victory Medal and the British War Medal.
Following demobilisation, he returned to work for Northern Bank in Newry.  Transfers followed to Royal Avenue (1924), Markets (1929), Pomeroy (1934) and Magherafelt (1938).
Henderson retired on 31st October 1951.

He died on 23rd September 1976.
The Staff Magazine ‘The Link (August 1981)’ contains a photograph of Henderson in a 1913 Northern Bank Staff Golf outing.