In 1911 he is living in house 2, Dunamoy, Rashee, Co. Antrim with his parents and 3 siblings, David, Margretta and John.
Other addresses are Curragh, Dungall, Ballymena, The Vow, Ballymoney and Cambrai, Newhill Road, Ballymoney.
Smyth would have joined the Belfast Banking Company around 1915 working in Newry. 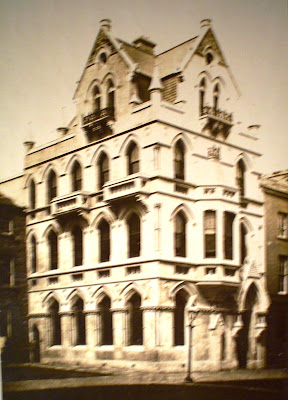 
A Medal Index Card in the name of William Thorpe Smyth records him serving in the Connaught Rangers before transferring to the 7th Battalion Royal Inniskilling Fusiliers. 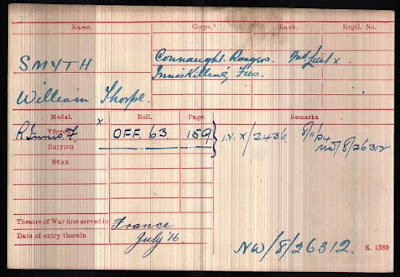 His first theatre of war is recorded as France from July 1916.  He attained the rank of Lieutenant.
The Belfast Banking Company 'Roll of Honour' booklet records Smyth as having been 'previously wounded'.

Between January to March 1918 he married Mary Edith Livingstone.  The wedding was registered in Dundalk.

Thorpe was awarded the British War Medal and the Victory Medal.

Following his demobilisation after the Great War, Smyth returned to work eventually ending up Accountants Department.
Retirement came in 1942.

The website Roll of Honour records the following information: