Colonel William Scott Caskey MBE
was born on 22nd March 1925.  His parents were Capt. James Alexander Caskey MC and Sarah Margaret Caskey nee Buchanan.  He was of Presbyterian faith.  His address was recorded as Breezemount, Roddens, Larne.
On 29th March 1943 Caskey joined Northern Bank at Head Office.  In the same year, he was transferred to Antrim Road as junior.
He resigned from the Bank on 31st March 1944 to enlist into the Royal Inniskilling Fusiliers with Service Number I4446495.  On 3rd August 1945 the London Gazette records Caskey as being promoted to 2nd Lieutenant with Service Number 352265 in the Royal Inniskilling Fusiliers.  Following the end of the war, he was promoted to Lieutenant on 22nd September 1947.
Caskey did not rejoin the bank.  This was confirmed in a note dated 6th January 1948 when Caskey advised the bank that he had a commission in the Royal Inniskilling Fusiliers.

In 1952, Captain Caskey was Adjutant to the Royal Engineers sub-unit of Queens' University OTC attending a camp at Ballyedmond. 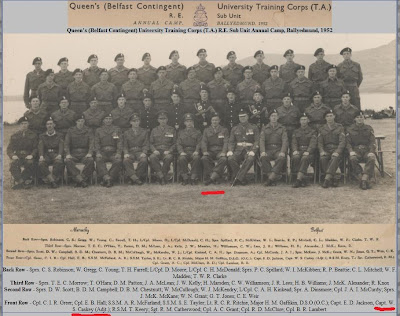 In 1953, he transferred to the Royal Army Pay Corps as a Captain and Paymaster with seniority from 5th October 1953.  Promotion to Major came on 22nd March 1959.
In 1962, he was awarded the MBE (Military Division) in the Queen's Birthday Honours.  On 31st December 1968, he was promoted to Lieutenant Colonel.
A further promotion to Colonel came on 30th December 1972 with seniority back dated to 30th June 1972.
On 30th October 1974, Colonel Caskey retired on account of disability.
Caskey had several papers published on the computerisation of army payrolls.