In 1901 Francis lived in house 35 Ballycarry Street, Clifton Ward, Belfast with his parents and 5 siblings:  John, Jane, Adam, Isabella and Sarah.  Francis is now known as Frank and his occupation is recorded as an Assistant Clothpasser.

In 1911 Frank is living in house 30 Ballyclare Street, Clifton Ward, Belfast with his parents, sister Jane Millar and her 2 children John and Isabella.  Frank's occupation is now a Hotel Servant / Boot.

Frank joined the Belfast Banking Company between 1911 and 1914.

On 7th September 1914 Francis enlisted into the 5th Battalion Royal Irish Fusiliers with Service Number 12473.  His first theatre of war is recorded as the Balkans from 12th July 1915. 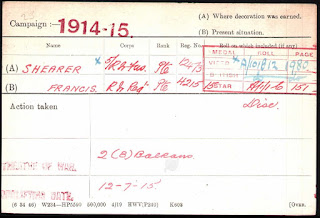 He later transferred to the 1st Battalion Royal Irish Regiment with Service Number 4215 and attained the rank of Lance Corporal.

On 16th March 1917 after 1 week with the Field Force was hospitalised on board Hospital Ship Warilda.  His ailment being described as 'dilusional, insanity'.  He was under treatment for 7 days before being transferred to a 'sick convoy' on 22nd March 1917. 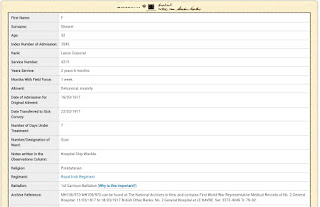 L/Cpl 4215 Francis Shearer was awarded the Silver War Badge (number 319352) due to sickness.  He was aged 32.  The War Badge records say he had served overseas.

He was also awarded the 1915 Star, the Victory Medal and the British War Medal.

A Pension Record card exists for Francis Shearer with entries from 1922 to 1930.  His address was recorded as 8 Ghent Street, Belfast.  His illness recorded as 'mental instability'. 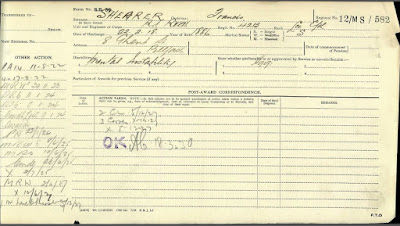 It is not known if Frank Shearer returned to work for the Belfast Banking Company.

Please leave a comment if you know anything of this official.
Posted by Gavin Bamford