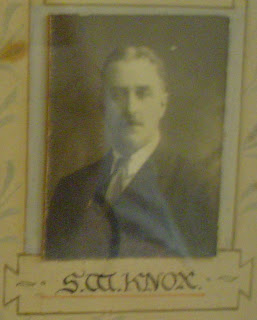 Captain Samuel (Sam) Wright Knox
was born in Coleraine in 1869.
Knox joined Northern Bank in 1885.  In 1901, Knox is living in house 11, Clifton Street, Dock Ward, Belfast.  By 1911, the family had moved to house 9, Somerton Road, Duncairn Ward, Belfast.  His occupation is described as a Bank Director.
Knox was based in Head Office when he volunteered and enlisted into the 16th Bn. Royal Irish Rifles.  He served with the British Expeditionary Force and was then attached to Royal Artillery at Flamertigue (Ypres) 1917.  Knox saw action at the Somme 1916 (Thiepval), Messines 1917 and Ypres 1917 (Passchendaele).  He was wounded twice and then invalided out of the service in February 1918.
He resigned his commission to resume civic duties and was granted the honorary rank of Captain on 14th March 1918.

In 1921 he was serving as a Director of Northern Bank.

When the Ulster Tower was opened in 1921 at Thiepval, France, trees were planted in memory of the officers and men who died there.  Tree markers were made and erected with the trees.  At a later date, after the trees had died out, the markers were disposed of in a skip.  Some were rescued and are now in the Albert Museum, France.  This marker records a tree planted on behalf of the 'British Legion' by Capt S W Knox.