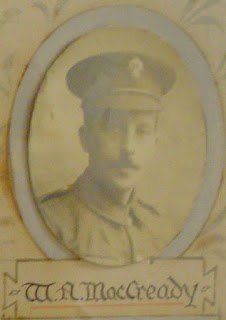 Lance Corporal William Austin McCready
was born on 12th March 1885 in Canterbury, New Zealand.  The family are living in Articlave, Co Derry at the turn of the century.  He was of Presbyterian faith.

On 5th December 1914, McCready volunteered and enlisted into the 24th (Sportsman’s) Bn. Royal Fusiliers as a Private for the term of the war.  He served in the British Expeditionary Force and was promoted to Lance Corporal.  His service was in the Somme 1916, Guillemont and Vimy Ridge before he became a Prisoner of War in Germany.  Demobilisation came in February 1919.  He was awarded the 1914/15 Star, the British Victory Medal and the British War Medal.

On 20th February 1919 he rejoined the Northern Bank at Londonderry.  Transfers to Newry (1919) and Head Office (1922) followed.
Posted by Gavin Bamford