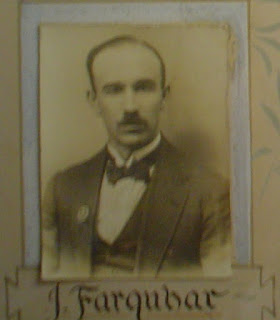 Corporal John Farquhar
was born in Monkstown, Whiteabbey on 28th December 1881.
On 17th May 1898, Farquhar joined Northern Bank.  Transfers followed with Ballybofey (1899), Newry (1903), Ballycarry (1903), Drumshanbo (1907) and Head Office (1909).  In 1911, Farquhar is boarding in house 7, Glenarm Road, Larne, Co. Antrim.  He describes himself as a Bank Official.  He was of Presbyterian faith.
Whilst based in Head Office on 6th November 1915, aged 33, he enlisted into the 4th Bn. Royal Irish Fusiliers as a Private.  A posting to the 7th Bn. Royal Irish Fusiliers followed and he also served with the British Expeditionary Force.  He was subsequently promoted to Lance Corporal and then Corporal.  He saw action in Guillemont 1916.  He received a gunshot wound to the right leg.  Demobilisation came in November 1918 and he was awarded the British Victory Medal and the British War Medal.
Following demobilisation, Farquhar rejoined the Northern Bank on 19th November 1918 at Head Office.  Transfers followed to Oldcastle (1919) and Dowra (1920) as Manager.
He retired on 30th September 1921.
He died in June 1954 aged 72.
Posted by Gavin Bamford

Email ThisBlogThis!Share to TwitterShare to FacebookShare to Pinterest
Labels: Northern Bank, Served, Surnames A to F, The Great War, Wounded