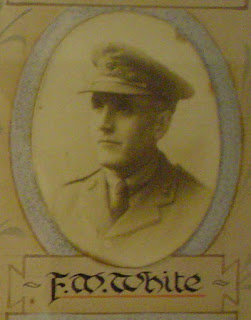 2nd Lieutenant Frederick William White
was born in Belfast on 19th June 1876.  He was the son of William and Elizabeth White.  In 1901, White was living in house 37, Clifton Road, Bangor, Co. Down.   He was of Church of Ireland faith.
On 1st November 1907, White joined Northern Bank at Head Office as a Solicitor.  In 1911, the family property is now described as house 79, Clifton Road, Bangor.  White describes his occupation as a Solicitor.
On 6th January 1917, he volunteered and enlisted into the Royal Garrison Artillery aged 41.  His Staff Record Card records his unit as the Inns of Court Officer Training Corps (OTC).  He was gazetted as a 2nd Lieutenant into the Royal Garrison Artillery and went on to serve in the British Expeditionary Force.  White saw service at St. Quentin 1918 and Courtrai 1918 before being demobilised in February 1919.  He was awarded the British Victory Medal and the British War Medal.
He rejoined the Northern Bank on 3rd March 1919 at Head Office and was appointed as a Director on 1st March 1929.
He retired on 1st February 1945.
Posted by Gavin Bamford