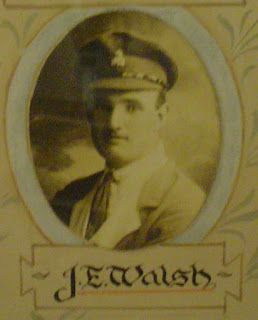 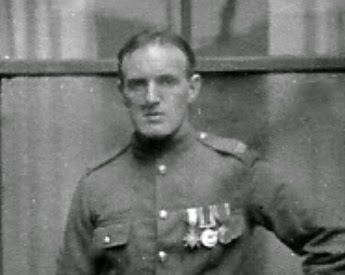 John was christened in Ramelton.

By 1911, Walsh was boarding in house 68, Bailieborough Town, Bailieborough, Co. Cavan.  He is described as a Bank Official.  [The record has been transcribed with the surname as Edmond Walsh].

Whilst based in Head Office, Aged 25, Walsh volunteered and enlisted into the 14th Bn. Royal Irish Rifles for the duration of the war.  The 14th battalion was known as the YCV - Young Citizen Volunteers.  His Service Number was 14/16078.

Walsh was injured twice by gunshot wounds.  After his injuries, he refused several times to have his leg amputated.

Demobilisation came in June 1918.  As he had been injured, Walsh was awarded the Silver War Badge (number 423, 212).  The following ledger image records the issue of this badge. 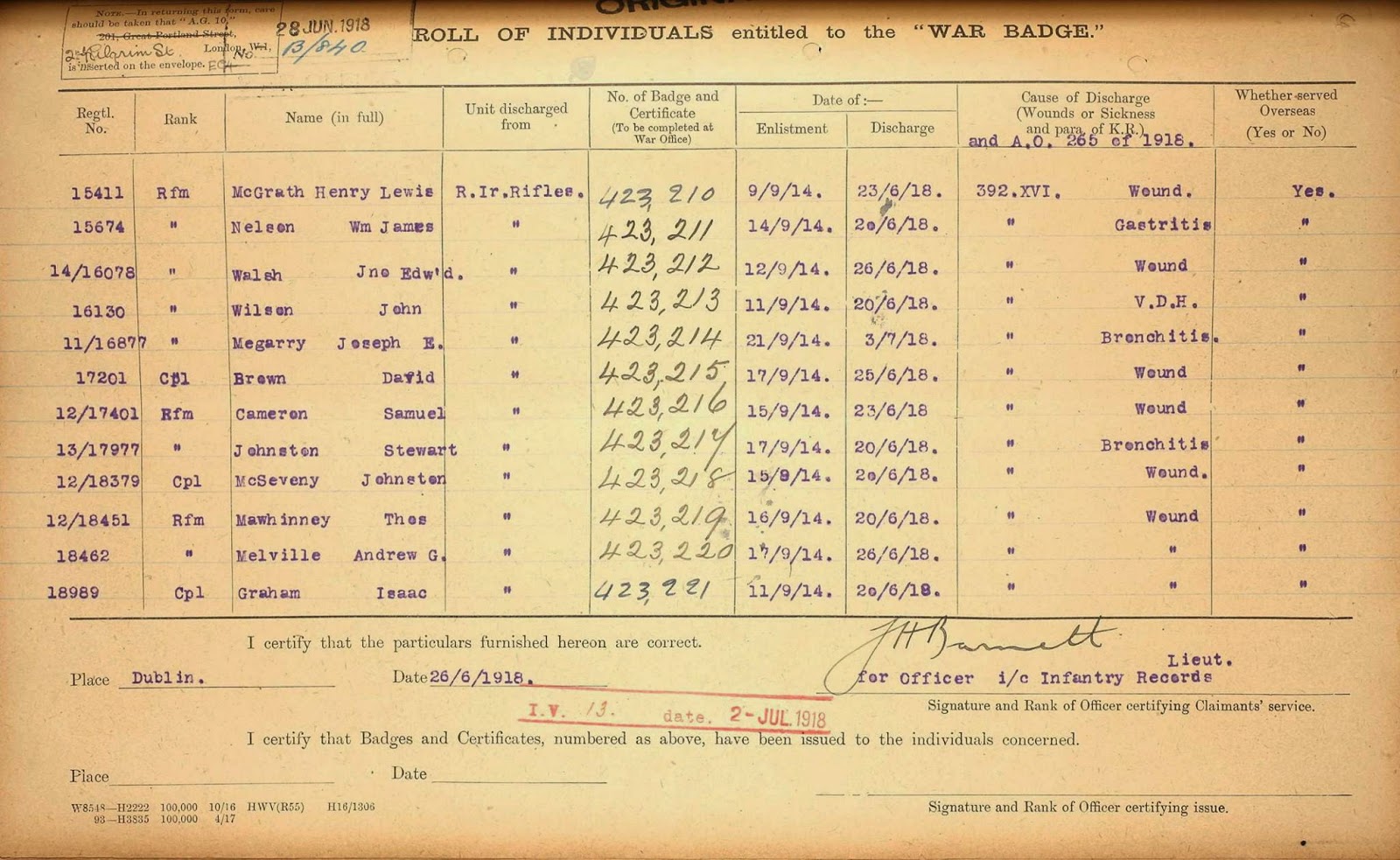 
He was also awarded the 1914/15 Star, the British Victory Medal and the British War Medal.  The following two images are the official Medal Index Cards for John E Walsh.

Card 1 indicates that Walsh qualified for the 1915 Star on 6th October 1915 and that he served in France. 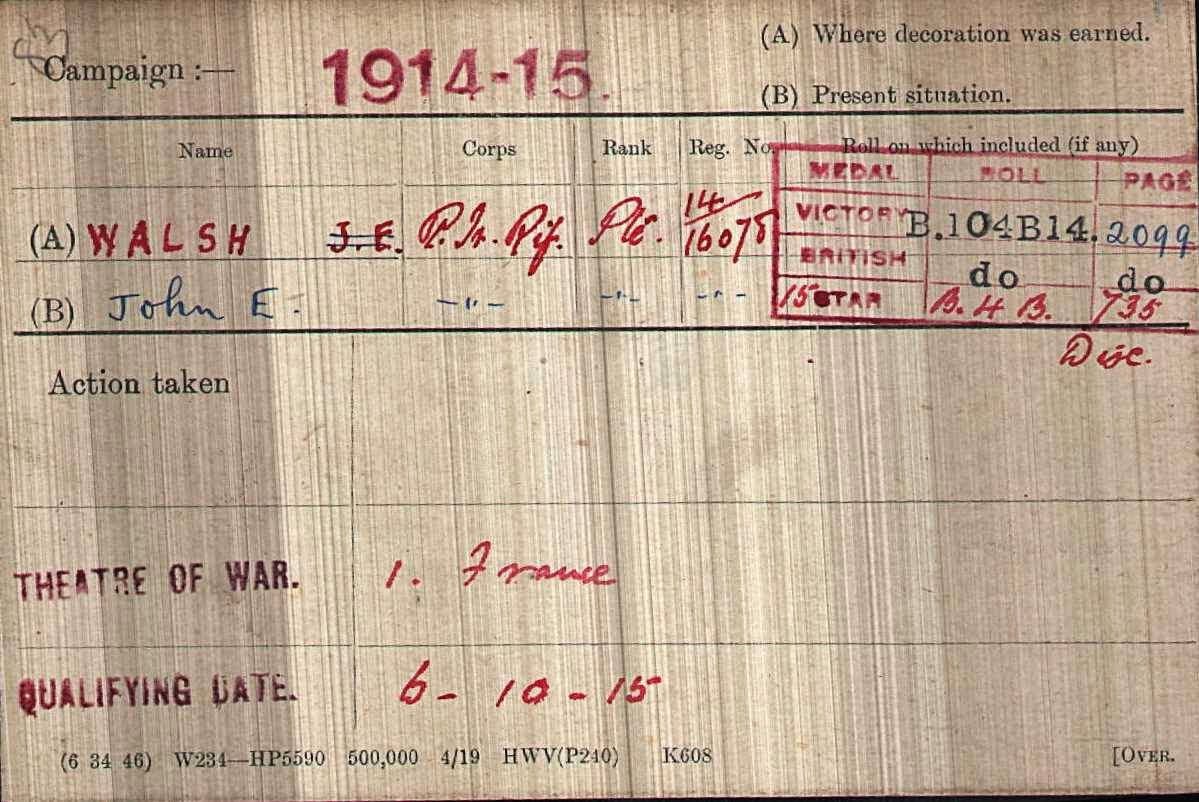 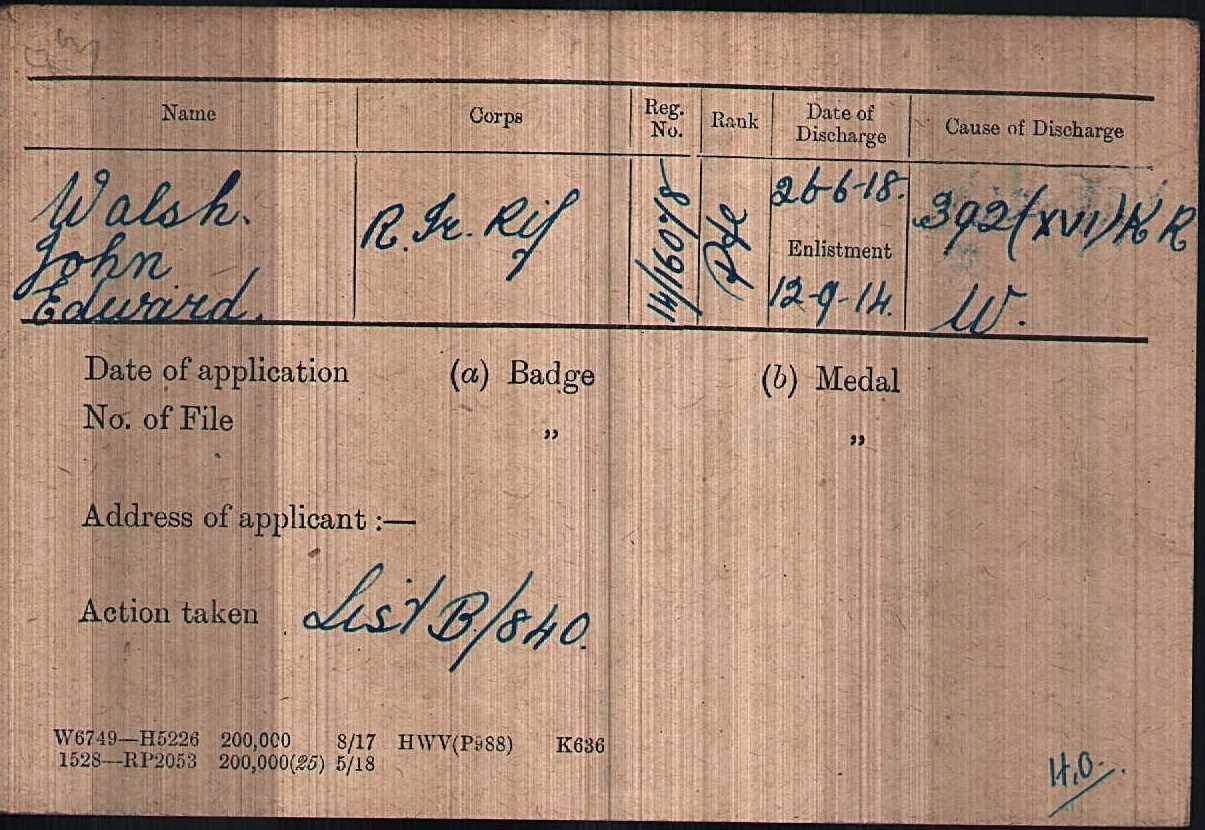 Following his discharge, there was a period of just over 1 year before Walsh rejoined the Northern Bank on 16th July 1919 at Head Office. He may have spent this period in hospital recuperating from his injuries.  Transfers followed to Royal Avenue (1928) and Claudy – manager (1941).

John lived at 36 Brookvale Avenue, Antrim Road, Belfast and worshipped in Duncairn Presbyterian Church.  His name is detailed on their Roll of Honour.  This tablet is framed in oak and contains the names of 192 men who enlisted and served in the forces.  As the church has closed and is now an arts centre, the tablet is now entrusted to the Somme Museum, Conlig, Bangor.  Two images at the bottom of this page are an article from the Northern Whig dated 2nd May 1921. 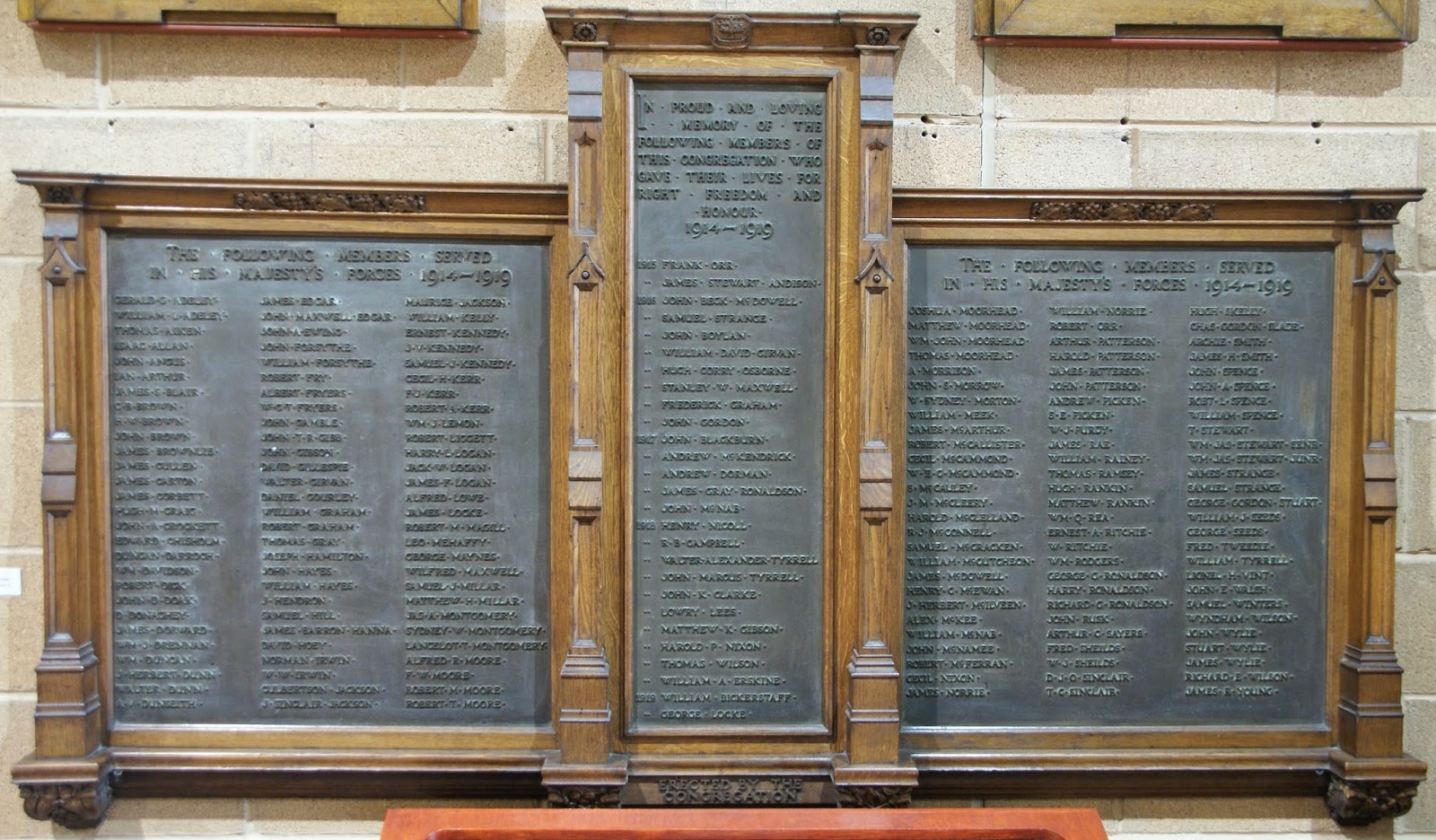 
At one stage he joined the Commercial Boat Club and with his team mates won the Connor Cup for rowing.

In August 1929 he married Miss Vida Caroline Mayrs of 113 Albertbridge Road, Belfast.  The 1911 Irish Census describes this property as house 113.1.

The Staff Magazine ‘The Link (August 1980)’ contains a photograph of Walsh in Royal Avenue branch in 1930.

John Edwards Walsh has been added to the Northern Bank War Memorials community on the Imperial War Museum (IWM) Lives of the First World War website.

Walsh's daughter, Mrs Pat Taylor has kindly given me the following images of her father from her family collection.  Scroll to the end to see an article written by Pat Taylor. 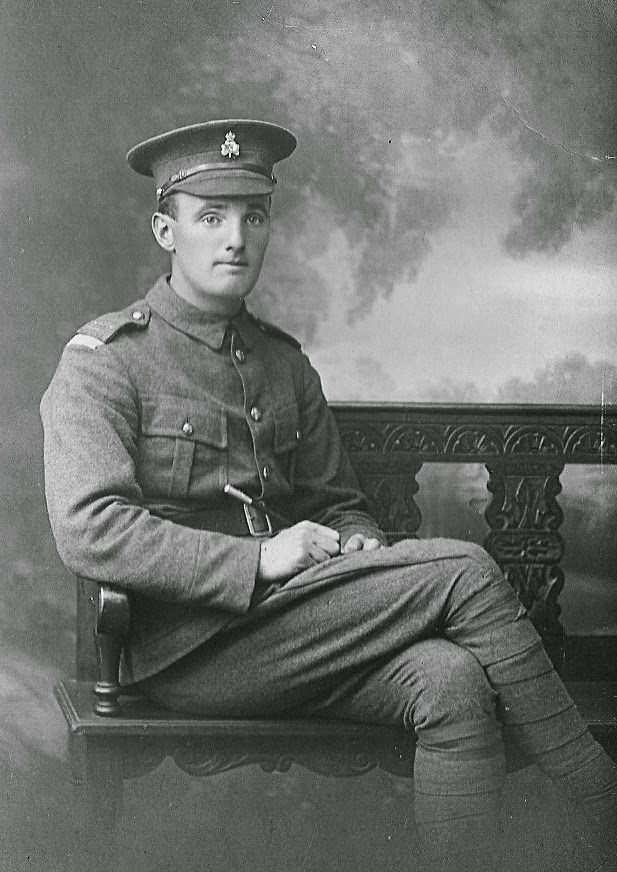 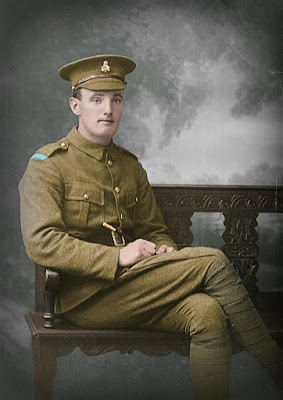 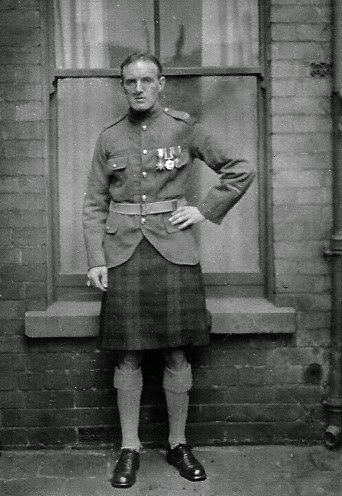 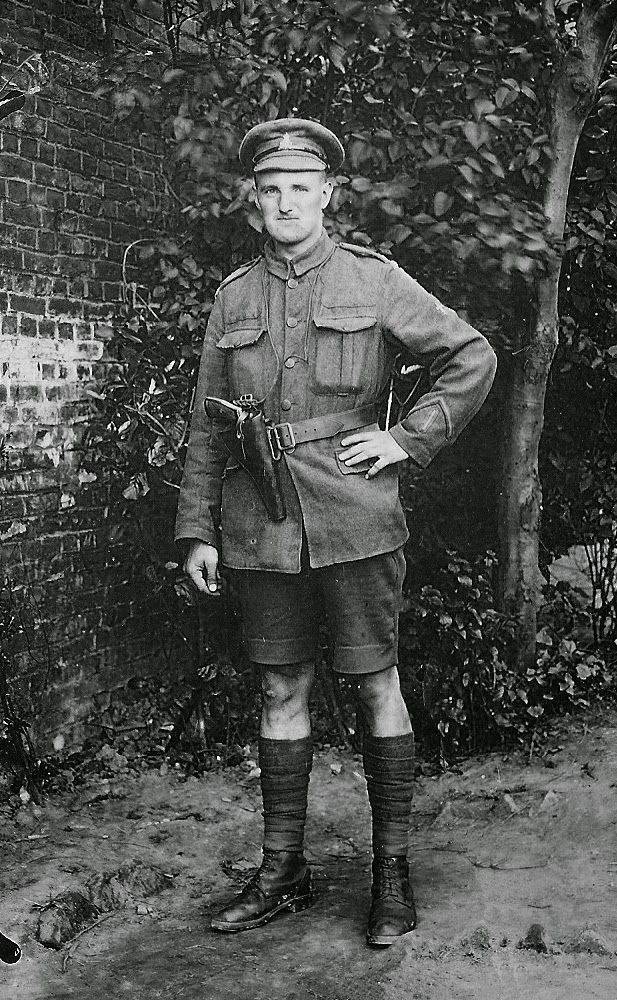 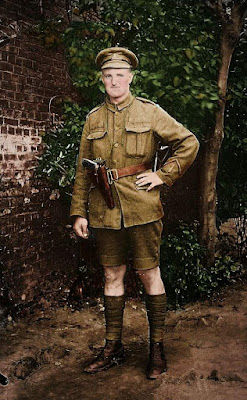 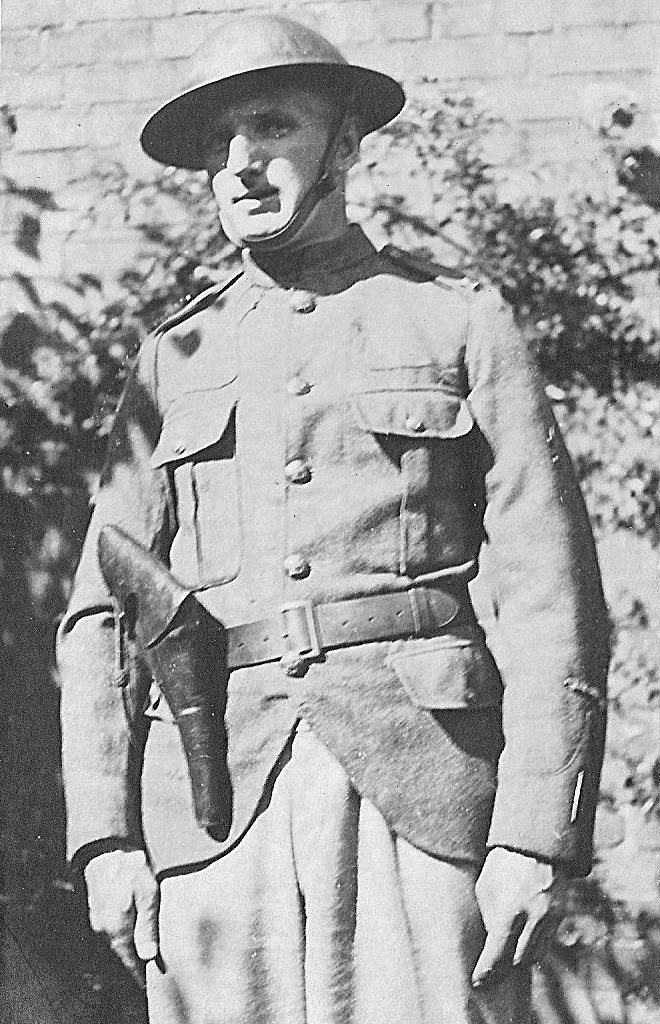 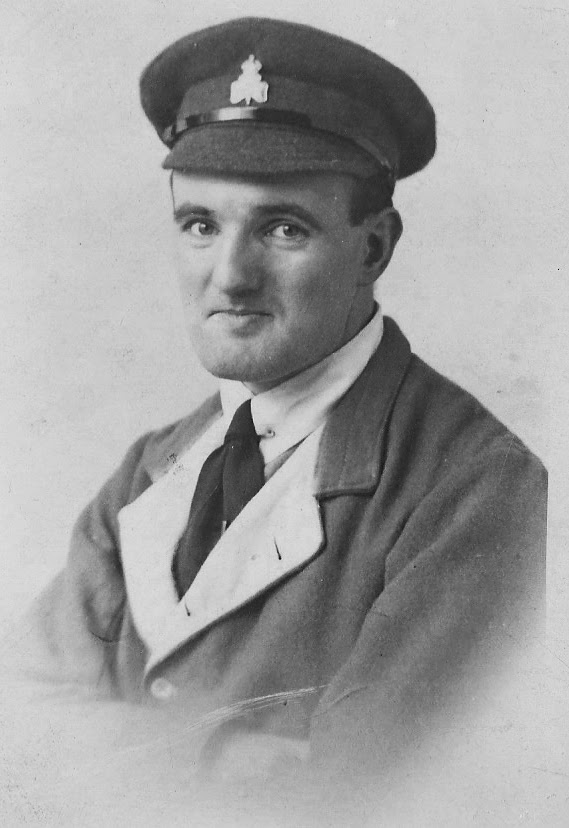 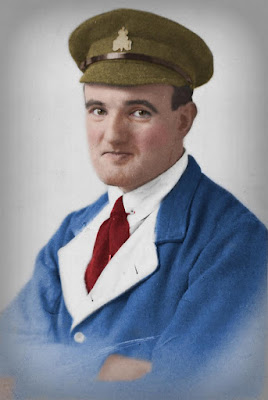 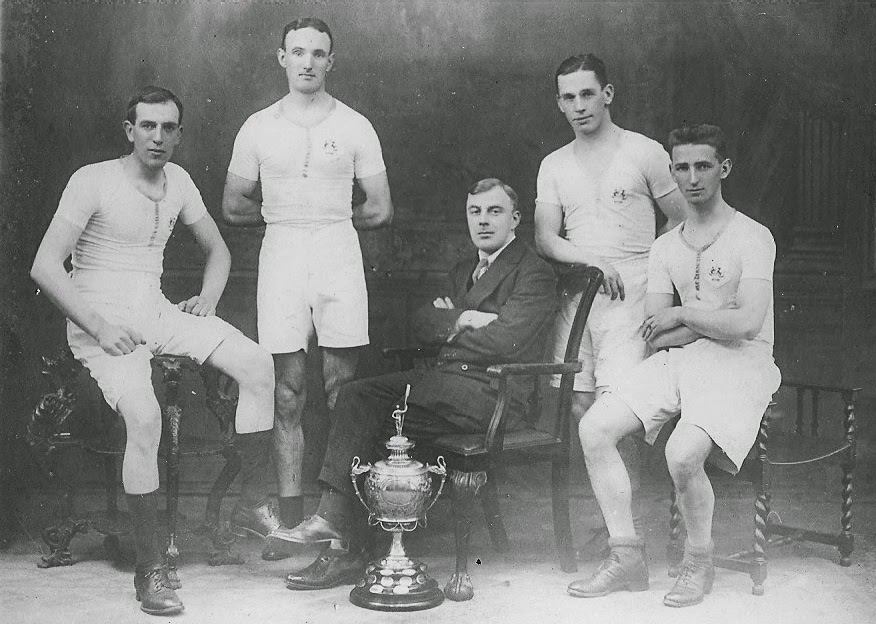 
One Sunday we were all coming out of Church together when my father met up with two ageing soldiers from the First World War.  One of them was J.W Harrip.  [Also a Northern Bank official].  They began to reminisce about old times and discovered that my mother and I didn’t know my father had been a hero and so they set about putting that to rights.

One night my Dad and several other soldiers had come under heavy rifle and shell fire while returning from a sortie in ‘No Man’s Land.’  When a count was taken it was discovered that his best friend was missing.  It was the decision of the officers that it would be foolhardy to attempt a rescue, ‘No hope in that Hell-fire,’ they declared.  However against all advice my Daddy had made his way back and found his pal very severely wounded but conscious.  Instant help was obviously needed, so he captured a German raiding party and forced the four soldiers to carry the wounded lad. back to the trenches.

The two old soldiers said he had steadfastly refused to have his name put forward for a medal, saying he had only done the usual day to day stuff. I almost burst with pride and thought my Dad was just amazing and was also particularly impressed by such modesty because he had never said a single word about it at home.

I had always known that he had been wounded at the Somme and still had two bullets in his back; he had let us feel them.  Fired from sideways on, they were surprisingly big and long, one being just a tiny fraction from his spine.  Later he was wounded again, it was either at Ypres or Messines where ever he was last. Pieces of shrapnel from an exploding shell went right through his leg at the ankle. He crawled into a captured German pill box and pulled himself on to some wooden boxes, but every time he lost consciousness his wounded limb slipped into the muddy flood water.  Eventually he was thrown on to a cart with dead men, but later, coming round, managed to attract attention.

He spent a year in hospital and had to argue vehemently with the doctors on a number of occasions as they were ‘hell bent’ on amputating his leg.  He was eventually able to return to Belfast, rejoin the Commercial Boat Club and win his third gold medal for rowing in a four.

He met with two old soldiers.
Surprised he’d not owned up,
they painted us a picture.

Moonlit, on a sortie they’d come
under fire, fought their way back
through the Somme’s hungry mud:

sodden, exhausted, their count showed
one short. Dad’s mate was missing.
‘No hope in that hellfire,’ the officers decided.

forced them to carry his friend.
Despite all efforts he wouldn’t have
his name put forward for a medal.

Even that day at the Port I felt the want.
I hanker for one still, to know it would be
handed down from old to young:

but there is only this poem.