Wing Commander Charles William Lindsay AFC
was born on 11th May 1910.
Born in Co. Leitrim, he was the son of David Lindsay and Alice Lindsay.

The 1911 Irish Census records the family as residing in house 2, Mount Royal, Portrush, Co. Antrim.  David records his occupation as a bank inspector.  There are 2 brothers, David (4) and Henry Alfred (2).  A nursemaid was also in the house on census day.
In 1901, an unmarried David Lindsay was boarding in house 111, Whitehead.  His occupation was recorded as Bank Manager.
Lindsay joined the Belfast Banking Company on 1st February 1928 and served in Antrim branch.
At that time, his father (David Lindsay) was living in 'Cooleen', Jordanstown and his brother, Henry Alfred Lindsay was working for Northern Bank, Royal Avenue, Belfast.
The London Gazette (1941) records a C W Lindsay AFC in the RAF.  His Service Number was 70402.  Promotions from Flight Lieutenant to Squadron Leader (1941 temp.), Squadron Leader (1942 war subs.) and to Wing Commander (1944 temp.).
On 27th March 1942, Lindsay was awarded the Air Force Cross (AFC).  The London Gazette recorded him as being in the 'Reserve of Air Force Officers'. 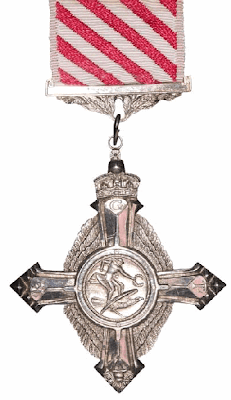 Following his war service, Lindsay resigned from the Bank on 22nd November 1946.

In 1949, the London Gazette records that he was granted an extension of service for five years in Class "C" and is granted the rank of Squadron Leader (subs.) with effect from 14th April 1948 (seniority 1st August 1940). He relinquishes the rank of Wing Commander (temp.) 1st November 1947 and is transferred to Class "A" with effect from 11th October 1948.

Lindsay continued on in the RAF until 11th May 1955 when he relinquished his commission and retained the rank of Wing Commander.
Posted by Gavin Bamford