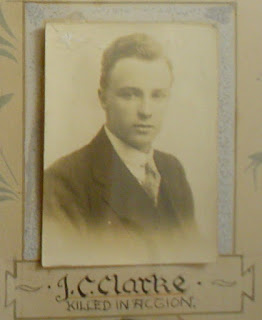 was born on 2nd February 1897 and was of Presbyterian faith.

On ‘Ulster Day’, Saturday, 28th September 1912, Clarke signed the Ulster Covenant at Articlave Orange Hall.
In October 1914, Clarke joined Northern Bank at Carrickfergus.
In July 1916, Clarke volunteered and enlisted into the 9th Bn. Royal Fusiliers as a Private.  His unit is also recorded as 26th Royal Fusiliers.  His Army Number was 23278.

This website Carrickfergus Roll of Honour records Clarke as being in 9th Battalion - Royal Fusiliers - City of London Regiment.  This regiment was in the 18th (Eastern) Division involved in the attacks in October 1916 on the stubbornly defended and vital position of and around the Schwaben Redoubt.  On 7th October there was a determined counter-attack by the Germans to recapture the Redoubt.  It appears that Private Clarke was killed during this assault.
Clarke went missing on 7th October 1916.  He is remembered in name on the Thiepval Memorial Pier and Face 8C, 9A and 16A.

Email ThisBlogThis!Share to TwitterShare to FacebookShare to Pinterest
Labels: Featured on facebook, Missing, Northern Bank, Surnames A to F, The Great War