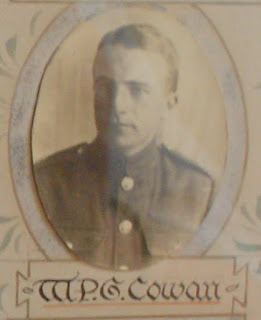 Corporal William Percival Graham Cowan
was born in Bailieborough on 1st May 1897.  He was the son of William John and Emily Caroline Cowan.  In 1901 the family were living in house 17, Deramore Avenue, Belfast.  William is described as a Bank Cashier.  By 1911, they had moved to house 62, Main Street, Ballybay, Co. Monaghan.  He was of Church of Ireland faith.
On 14th April 1914, Cowan joined Northern Bank in Head office.  Transfers followed to Bailieborough (1914), Virginia (19150 and Ramelton (1915).
Whilst based in Ramelton, Cowan volunteered for war service on 11th November 1915 (aged 18) into the 3rd Bn. Royal Inniskilling Fusiliers as a Private.  He saw service with the British Expeditionary Force, transferred to the North Irish Horse, thence the 9th Bn. Royal Irish Fusiliers.  He was posted to Cadet School, Ripon in 1918 and promoted to Corporal.  Cowan saw action in Cambrai 1917, Havincourt 1917 and with the Allied Advance 1918.  He was demobilised in February 1919 and was awarded the British Victory Medal and the British War Medal.
Following demobilisation on 18th February 1919, he rejoined the Bank in Dungannon.  Transfers followed to Head Office – Stock & Coupon Department (1922), Shaftesbury Square (1931) and Irvinestown (1933).
Posted by Gavin Bamford