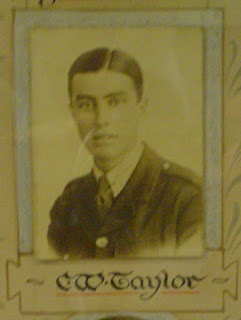 Trooper Cyril William Taylor
was born in Belfast on 23rd November 1898.  His address is house 4, Copeland Terrace, Carrickfergus.   He was of Church of Ireland faith.
On 12th January 1915, he joined Northern Bank at Head Office.
Whilst based in Head Office, he volunteered and enlisted into the North Irish Horse as a Trooper aged 17.  He moved to the Royal Garrison Artillery before being demobilised in January 1919.
Following demobilisation, Taylor rejoined the Northern Bank on 10th February 1919 at Head Office.  Transfers followed to Dromore (1923), Coleraine (1925), Kilrea (1937) and Lisburn – sub-manager (1944).
Taylor retired on 31st December 1959.
Derek Taylor, a descendent of C W Taylor attended the 2000 re-dedication ceremony of the Rolls of Honour.
Posted by Gavin Bamford