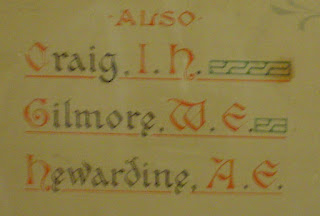 John Henry Craig
was born on 12th April 1896.  He was the son of John and Susan Craig.  In 1901 the family lived in house 7, Kildare Street, Newry.  By 1911 the property is known as house 4, Kildare Street, Newry.  He was of Church of Ireland faith.
On 29th May 1912 he joined Northern Bank at Head Office.  Transfers followed to Ballyclare (1912) and Head Office (1914).
On ‘Ulster Day’, Saturday, 28th September 1912, Craig signed the Ulster Covenant at Newry Orange Hall.
On 19th September 1914 he volunteered and enlisted into the Royal Irish Rifles for the duration of the war.  Craig was discharged from the Army on 25th May 1918.
Posted by Gavin Bamford