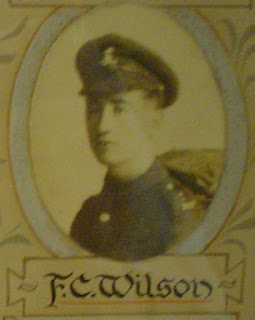 Frederick Charles Wilson
was born on 29th March 1896 and from Knowehead, Ballyclare. He was of Presbyterian faith.
On ‘Ulster Day’, Saturday, 28th September 1912, Wilson signed the Ulster Covenant at Ballyclare.
On 3rd June 1913 he joined Northern Bank at Royal Avenue.  In the same year he was transferred to Head Office and then Drumshanbo.
In 1915, whilst in Drumshanbo, he volunteered and enlisted into the Royal Dublin Fusiliers aged 19.
Following demobilisation, he rejoined the Northern Bank on 2nd March 1919.  Transfers followed to Claudy (1920), Londonderry (1922), Beragh (1922) and Head Office (1923).