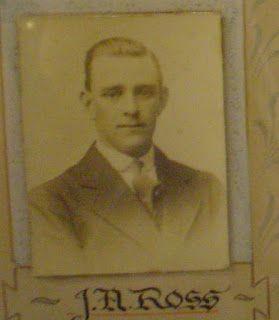 He was the son of Thomas Ross and Annie Ross.  In 1901, the family lived in house 32, Gransha, Islandmagee, Co. Antrim.  He was of Methodist faith.
On 13th December 1910 Ross joined Northern Bank at Head Office.  Transfers followed to Bray (1911) and Ball’s Branch (1914).  By 1911, Ross is still living with his family in Islandmagee.  His occupation is recorded as a Bank Clerk.
On ‘Ulster Day’, Saturday, 28th September 1912, Ross signed the Ulster Covenant at Islandmagee Orange Hall giving his address as Mullaghboy.
Ross volunteered and enlisted on 7th December 1915, aged 22, into the North Irish Horse as a Trooper.  He served with the British Expeditionary Force before transferring to the Royal Irish Fusiliers.  Service was seen in Messines 1917, Cambrai 1917, St. Quentin 1918 and Bailleul 1918.  Ross was injured 4 times; a gunshot wound to the right arm, a gunshot wound to the arm, a gunshot wound to the left leg before becoming permanently disabled.  Demobilisation came on 14th March 1919.  He was awarded the British Victory Medal and the British War Medal.
Following demobilisation, Ross rejoined the Northern Bank on 2nd June 1919 at Head Office.  Transfers followed to Portaferry (1920), Lurgan (1926) and Markets – pro-manager (1934).
On 2nd January 1940, Ross died suddenly.