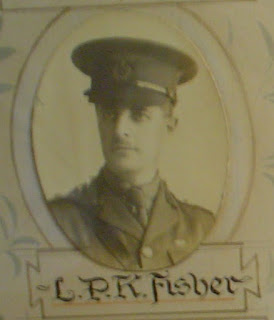 By 1911 Fisher has married and is living in house 4, Waverley Drive, Bangor, Co. Down.  He describes himself as a Bank Cashier.
On ‘Ulster Day’, Saturday, 28th September 1912, Fisher signed the Ulster Covenant at Glenville, Cushendall.
On 7th November 1915, he volunteered and enlisted into the Royal Engineers.  He was later promoted to Lieutenant.  He may also have served in the Kings Liverpool Regiment.  He relinquished his commission on 1st June 1919 on account of ill-health caused by wounds.
Following demobilisation, Fisher retired from the Bank on 31st August 1919. He was a member of the Belfast Naturalists’ Field Club.
Posted by Gavin Bamford

Email ThisBlogThis!Share to TwitterShare to FacebookShare to Pinterest
Labels: Northern Bank, Served, Surnames A to F, The Great War, Wounded