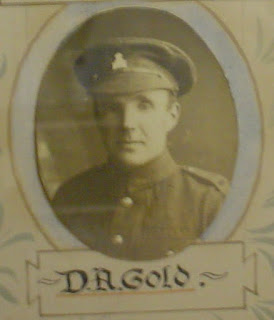 Lance Corporal David Arthur Gold
was born in Ballybay.
He joined Northern Bank in 1897.  In 1901 he was boarding in house 33, North Street, Ballycastle.  He is known as Arthur and his occupation is Bank Clerk.  By 1911, Gold is boarding in house 1, Town Parks, Comber, Co. Down.  He is described as a Bank Cashier.
Gold was based in Fintona branch when he enlisted into the 14th Bn. RIR as a Private.  He served with the British Expeditionary Force and was subsequently promoted to Lance Corporal.  Gold saw action in the Somme 1916 and eventually became a Prisoner of War in Germany.  He received a gunshot wound and lost his right eye.  Demobilisation came in March 1919 and he was awarded the 1914/15 Star, the British Victory Medal and the British War Medal.
Following demobilisation, Gold rejoined the Northern Bank.
Posted by Gavin Bamford