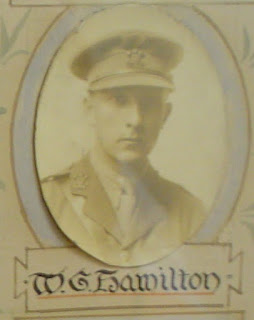 2nd Lieutenant Walter Gamble Hamilton
was born in Dromore, Co. Down on 18th November 1884.  He was the son of John and Emily Hamilton.  In 1901 the family were living in house 3, Princes Street, Dromore, Co. Down.  He was of Church of Ireland faith.

On 3rd June 1901, Hamilton joined Northern Bank in Head Office.    Transfers followed with Grafton Street (1901), Head Office (1904), Coleraine (1904), Elphin (1908), Newtownstewart (1911), Head Office – relief (1914) and Shaftesbury Square (1914).  In 1911, Hamilton was boarding in house 8, Main Street, Newtownstewart, Co. Tyrone.  He describes himself as a Bank Official.
On ‘Ulster Day’, Saturday, 28th September 1912, Hamilton signed the Ulster Covenant at Newtownstewart Orange Hall.
He was based in Shaftesbury Square branch when he enlisted, aged 31, on 8th December 1915 into the North Irish Horse as a Trooper.  He served with the British Expeditionary Force and the 10th Corps Cavalry.  He was promoted to Corporal before being gazetted as a 2nd Lieutenant Prince of Wales Leinster Regt (RC); attached Royal Inniskilling Fusiliers.  Hamilton saw action at Messines 1917 and with the Allied Advances 1918.  Demobilisation came in 1918 when he was invalided home.  He was awarded the British Victory Medal and the British War Medal.
Following demobilisation, Hamilton rejoined Northern Bank in May 1919.  In He was transferred to Connswater in 1922.  In 1936, he was appointed to Head Office as Head of Sort.
Posted by Gavin Bamford