The Irish Census 1901 records a Benjamin (20) as boarding in house 21 Clanmorris, Ardfert, Co. Kerry.  His occupation is recorded as 'Ordnance Survey'.  Two other 'OS' staff are boarding in this property.

The Irish Census 1911 records a Benjamin (29) living in house 32 Golden Lane, Wood Quay, Dublin.  His occupation is recorded as a Shop Assistant.

On 10th March 1912 Benjamin (full age) married Emily Martha Wood.  Both their addresses are recorded as 22 Adelaide Street, Kingstown.  Benjamin's occupation is recorded as a Bank Porter.  His father is recorded as Robert Shannon.  [This does not agree with the birth record].

Prior to 1912 Benjamin Shannon became a Bank Porter for the Belfast Banking Company.

Benjamin enlisted directly into the Royal Flying Corps (on 16th April) 1917 as a Class F Reservist (with Service Number 76056) eventually being appointed as a Air Mech 2.

An enquiry left on the forum of the '1914-1918.Invisionzone.com' led to Forum member, 'HarryBrook' advising me of the following details:

The Belfast Banking Company had branches all over Ireland.  At partition, the BBCo made the decision to sell all its (now) southern branches to the Royal Bank of Ireland. 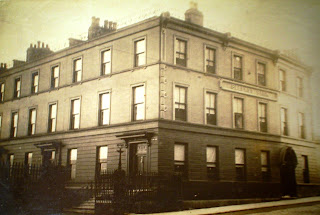 The site of this building is now occupied by Dunnes Stores (re Google Earth image.  Across the road is the former Royal Bank of Ireland branch and bank house.  Bernard Shannon and hios family probably entered via the left hand doorway. 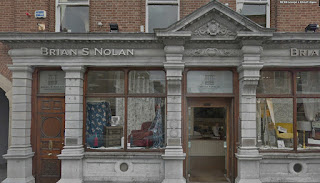 
On 18th November 1962 Benjamin Shannon (81 - widower) died at 38 Belgrave Square, Monkstown.  His occupation is recorded as a bank porter.  Emily E Shannon, daughter was present at his death.