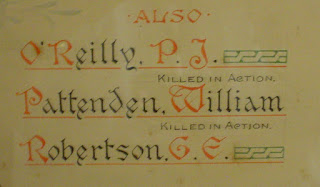 Cadet George Edward Robertson
was born in Waterford on 22nd June 1882.  He was the son of Mary Robertson and of Methodist faith.
On 9th April 1901 Robertson joined Northern Bank at Ball’s Branch.  In 1904, he was transferred to Grafton Street.  In 1911, Robertson is residing at house 13, Claremont, Drumcondra, Dublin.  He is described as a Bank Official.
Whilst in Grafton Street, he volunteered and enlisted into the Dublin University Officer Training Corps (OTC) as a Cadet.  He was discharged from the forces on 23rd September 1918.
Following his discharge, he rejoined the Northern Bank on 21st October 1918 at Ball’s Branch.  Transfers followed to Grafton Street (1919), Boyle (1925), Southern (1927) and Ball’s Branch (1928).
Robertson retired on 30th April 1946 and died on 21st July 1954.
The Staff Magazine ‘The Link (Summer 1986)’ contains a photograph of Robertson in a 1936 Northern Bank Staff Golf outing.
Posted by Gavin Bamford