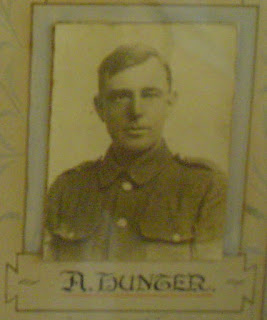 Sergeant Arthur Hunter
was born in Ballycastle in 1882.
Hunter joined Northern Bank in 1897.  In 1901, he was boarding in house 9, Lisburn Street, Hillsborough, Co. Down.  His occupation is Bank Clerk.  By 1911, Hunter was living in house 67, Beechwood Avenue, Londonderry, Co. Londonderry.  He is described as a Bank Cashier.
Hunter was based in Head Office when he enlisted into the 8th Bn. RIR as a Private.  He served with the British Expeditionary Force and then transferred into the 16th Bn. RIR (Pioneers).  He was later promoted to Sergeant.  Hunter saw action at the Somme 1916 (Theipval), Messines 1917, Ypres 1917, German Retreat (Courtrai) 1918.  He was injured and suffered a gunshot wound.  Demobilisation came in February 1919.
He was awarded the 1914/15 Star, the British Victory Medal and the British War Medal.
Posted by Gavin Bamford