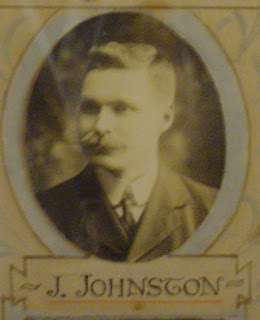 Sergeant John Johnston
was born in Stranocum in 1876.

Johnston joined the Northern Bank in 1904.

In 1911, John Johnston living in house 14.2 Donegall Square West, St. Anne’s Ward, Belfast. He is described as a Bank Caretaker.


He was based in Donegall Square when he enlisted into the 14th Bn. RIR as a Private.  He served with the British Expeditionary Force before transferring into the 2nd Royal Munster Fusiliers and then into the 2nd Royal Irish Regiment.  He was promoted to Sergeant. Johnston saw action at the Somme 1916 (Thiepval), Messines 1917, Nieppe Forest, River Lys, Escaut 1918 and the Allied Advance 1918.  He received 3 gunshot wounds in separate incidents.