On 27th January 2014 the writer noticed an 'Illuminated Address' book in the name of Henry E Kearney' for sale in Ballinderry Antiques, Lower Ballinderry Road, Upper Ballinderry, Lisburn, BT28 2EP.  Best price would have been circa £260.  The book had been produced on the transfer of Kearney from Downpatrick. 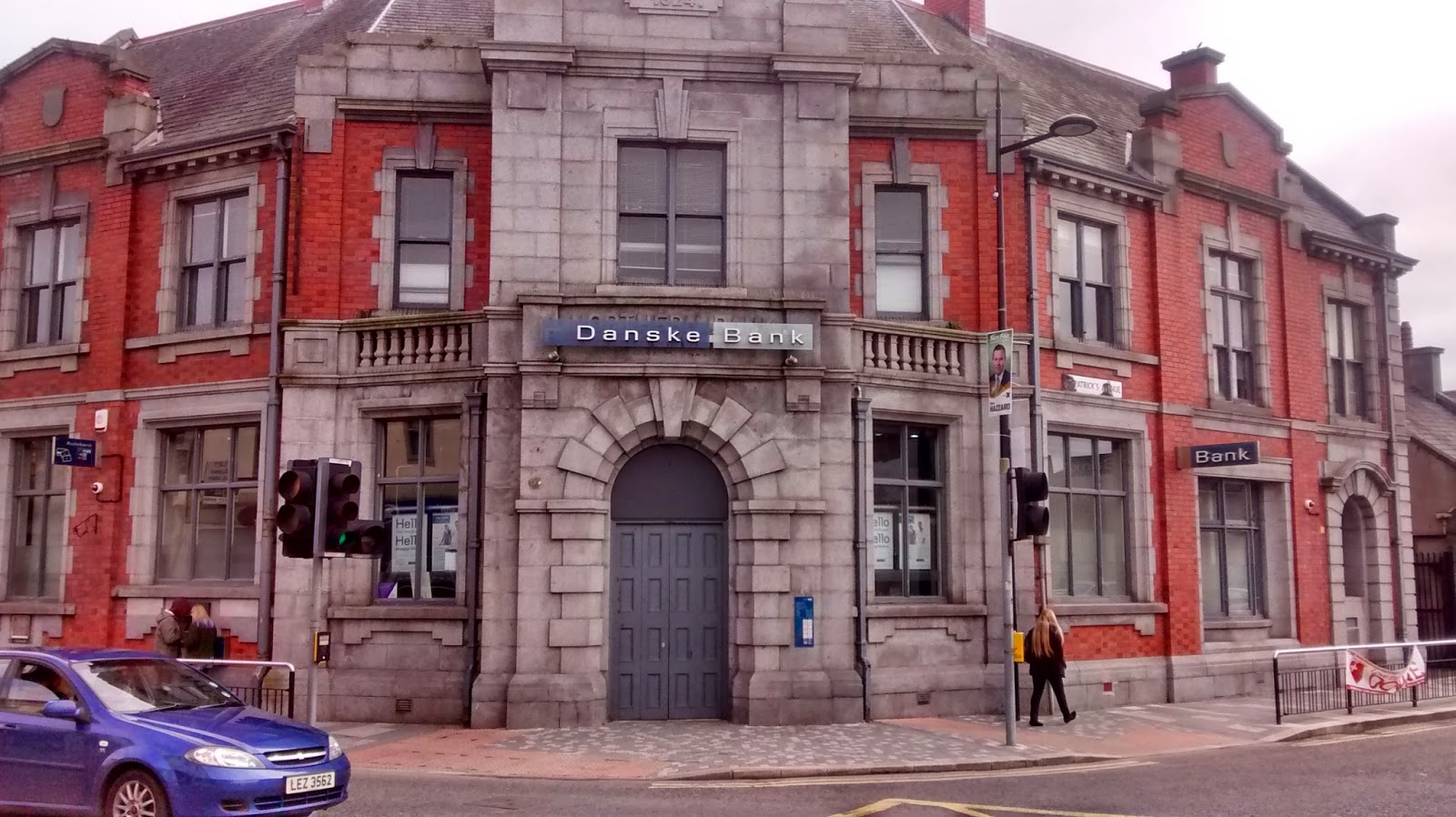 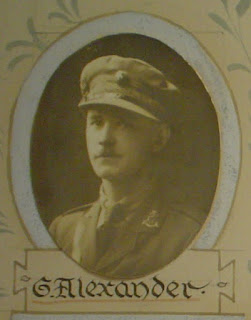 He was the son of Francis Alexander and Charlotte Alexander.  Francis was the 7th son of a 7th son.  In 1901 the family lived in house 8, St. Ives Gardens, Cromac, Belfast.  He had a sister called Fanny Alexander who was 2 at the time of the 1901 census.

By 1911 the family had moved to house 5, Stranmillis Park, Belfast.

Alexander applied to join the Northern Bank in 1912.  He received a letter from the bank advising him that he had been successful in an examination held on 30th October 1912. 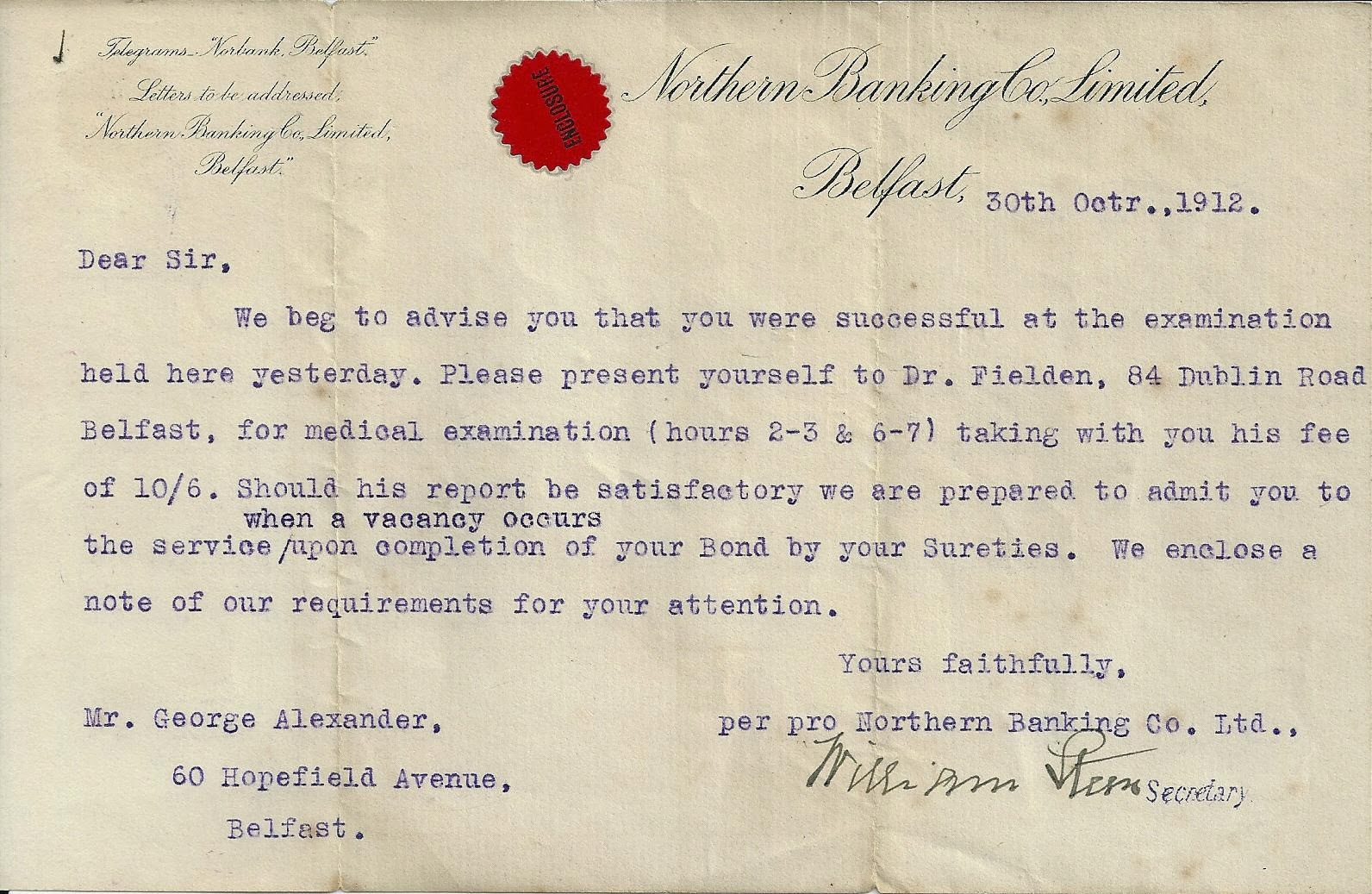 Later he attended a medical examination with a Dr Victor George Leopold Fielden of 84 Dublin Road, Belfast at a cost of 10/6 (£0.52.5).  In the 1911 census, Dr Fielden described himself as a Medical Practioner, anaeathesist, Queen's University Belfast.

Alexander started the bank at Head Office on 26th November 1912.  He was of Independent faith.
In 1915 he enlisted as a Private into the 17th Bn. Royal Irish Rifles (Cadet Company) aged 18.

On 5th August 1916 he was promoted to a Temporary 2nd Lieutenant with the 17th Bn. Royal Irish Rifles.  His Warrant from the King is pictured below.  The front of the document is dated 28th August 1916.

Within the actual warrant, it has been dated as 26th August 1916 (within the seventh year of the reign of King George V)﻿ 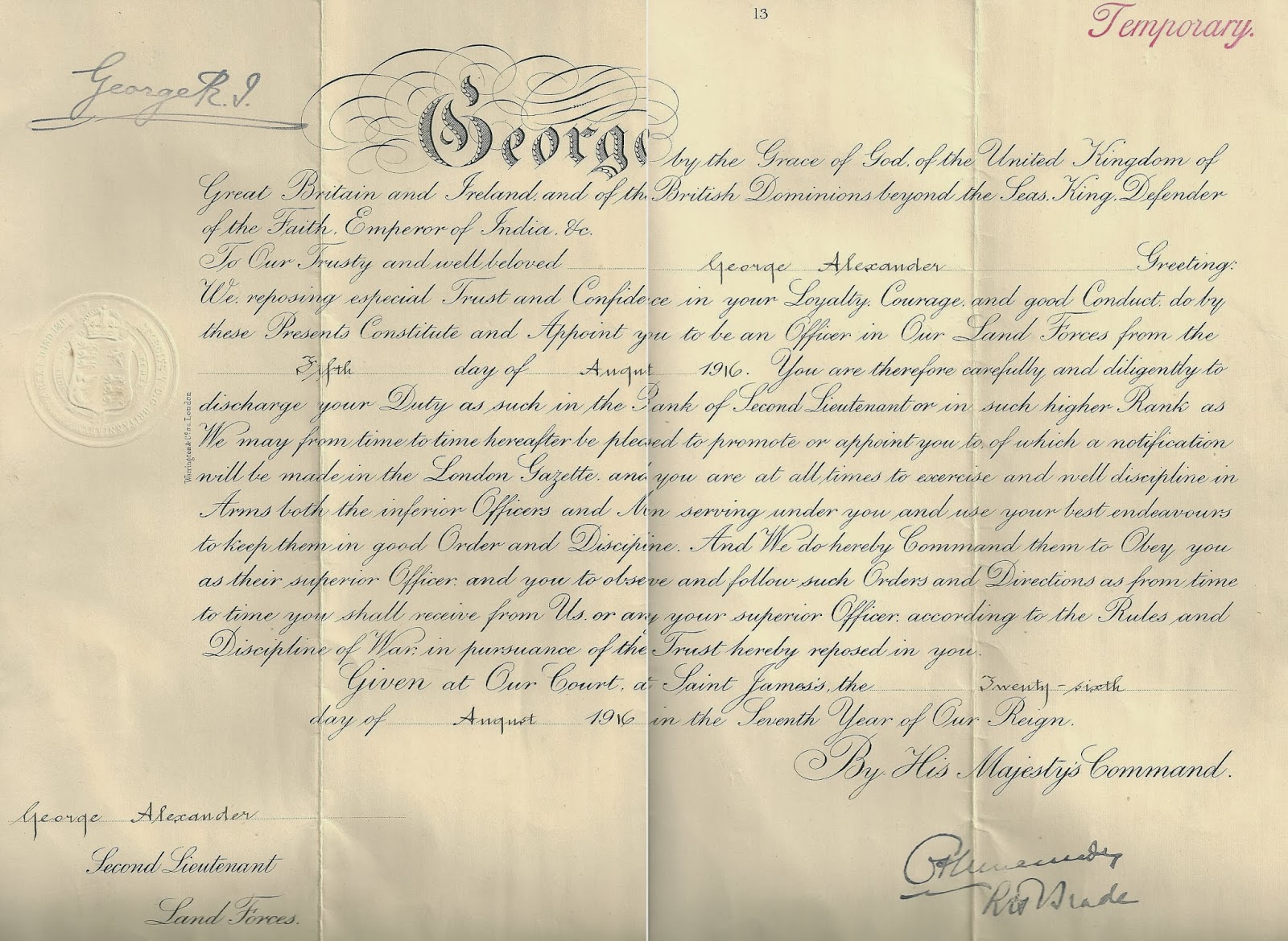 Later he was posted to the 6th Bn. Royal Irish Rifles.  Alexander later served with the Salonica Expeditionary Force and was later promoted to Lieutenant.  He saw action at Struma River (Macedonia).

On 24th October 1916, Alexander became a Prisoner of War in Bulgaria.  The Belfast News Letter of 13th December 1916 reports: 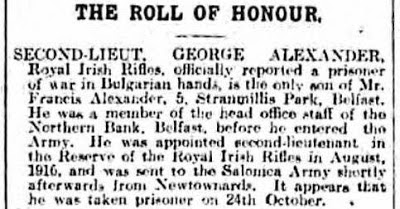 Alexander was released from being a Prisoner of War in 1918 and returned to the United Kingdom.  A printed letter from the King dated 1918 was sent to him 'welcoming him on his release'.  The envelope and letter are pictured below: 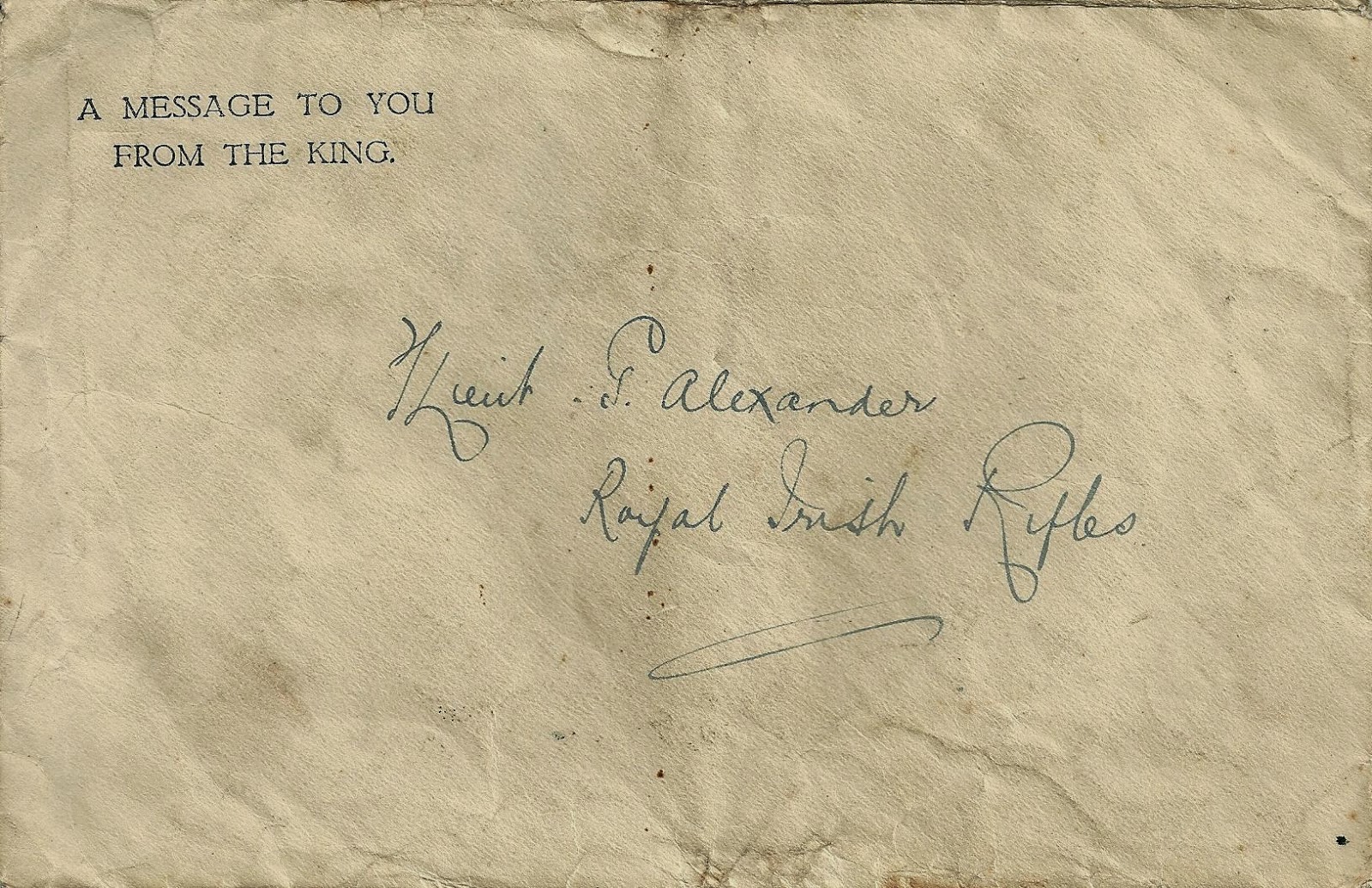 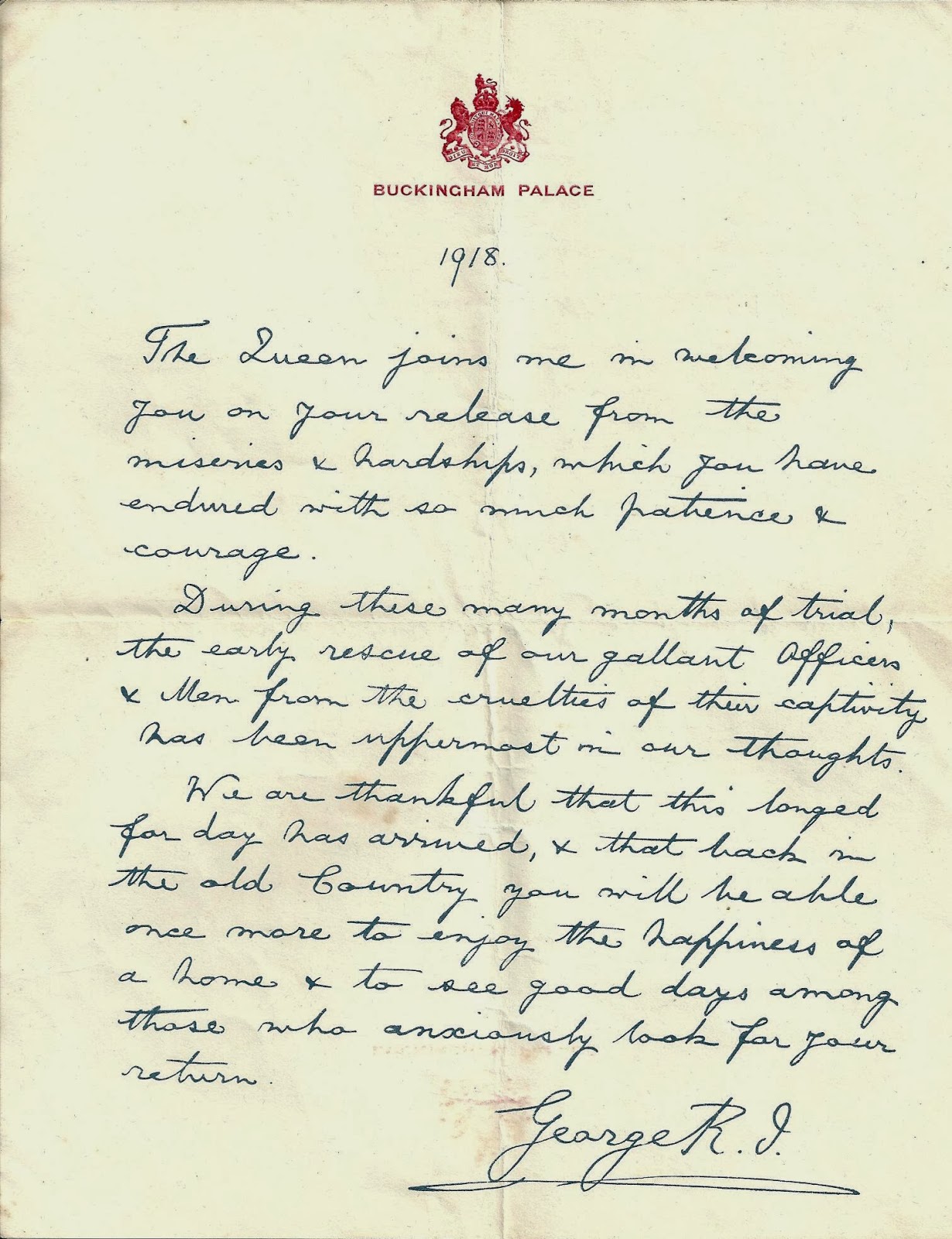 Following demobilisation, Alexander rejoined the Northern Bank on 14th April 1919 and was posted to Newry branch.  Transfers followed to Head Office (1921), Randalstown (1921) and Royal Avenue (1923).  Whilst based in Royal Avenue branch, Alexander studied for his Institute of Bankers in Ireland examinations.  On 15th June 1926, Edwin D Hill (director and author of the Northern Banking Company Centenry Volume 1824 to 1924) wrote a hand written letter to Alexander giving unofficial notice of his examination result. 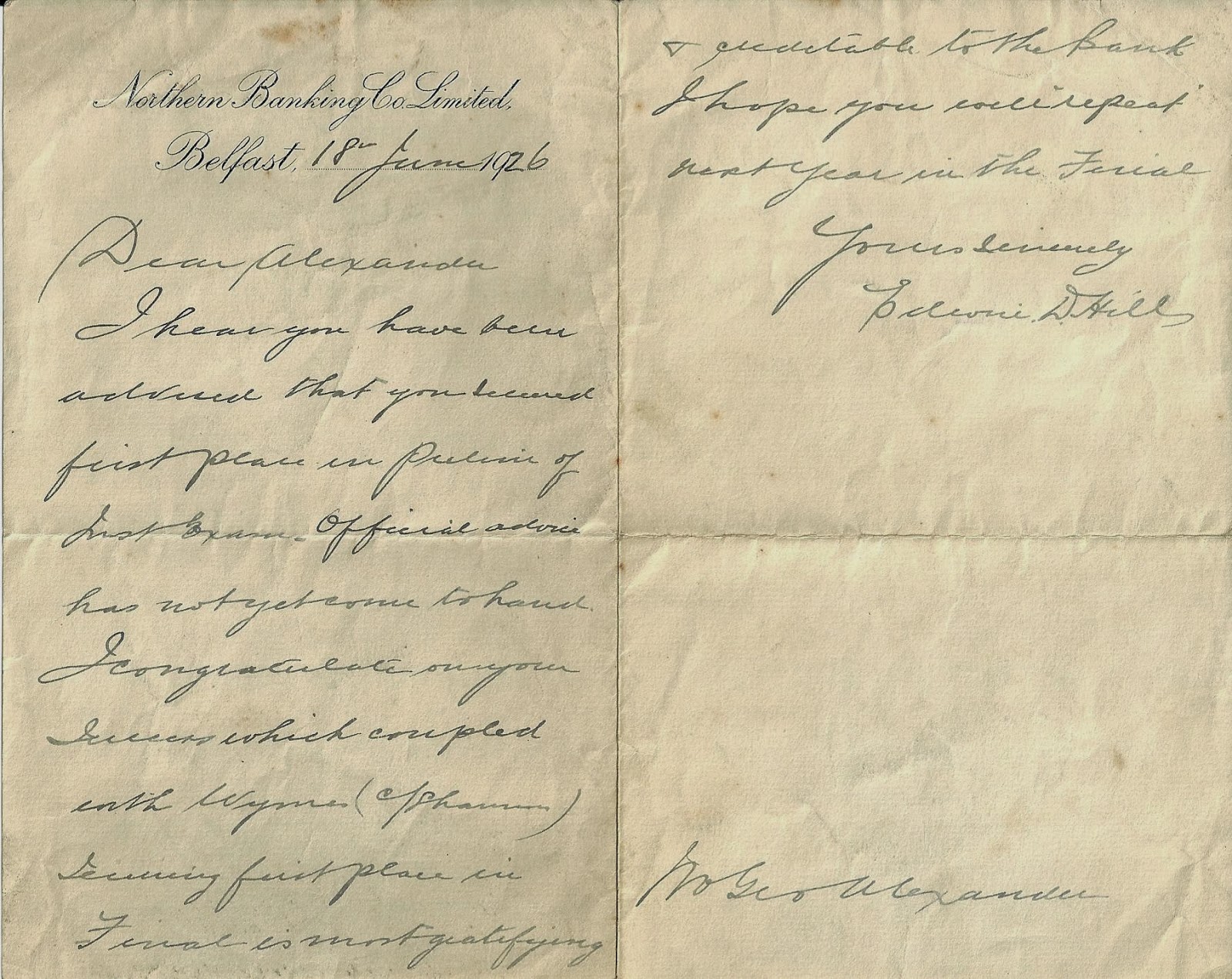 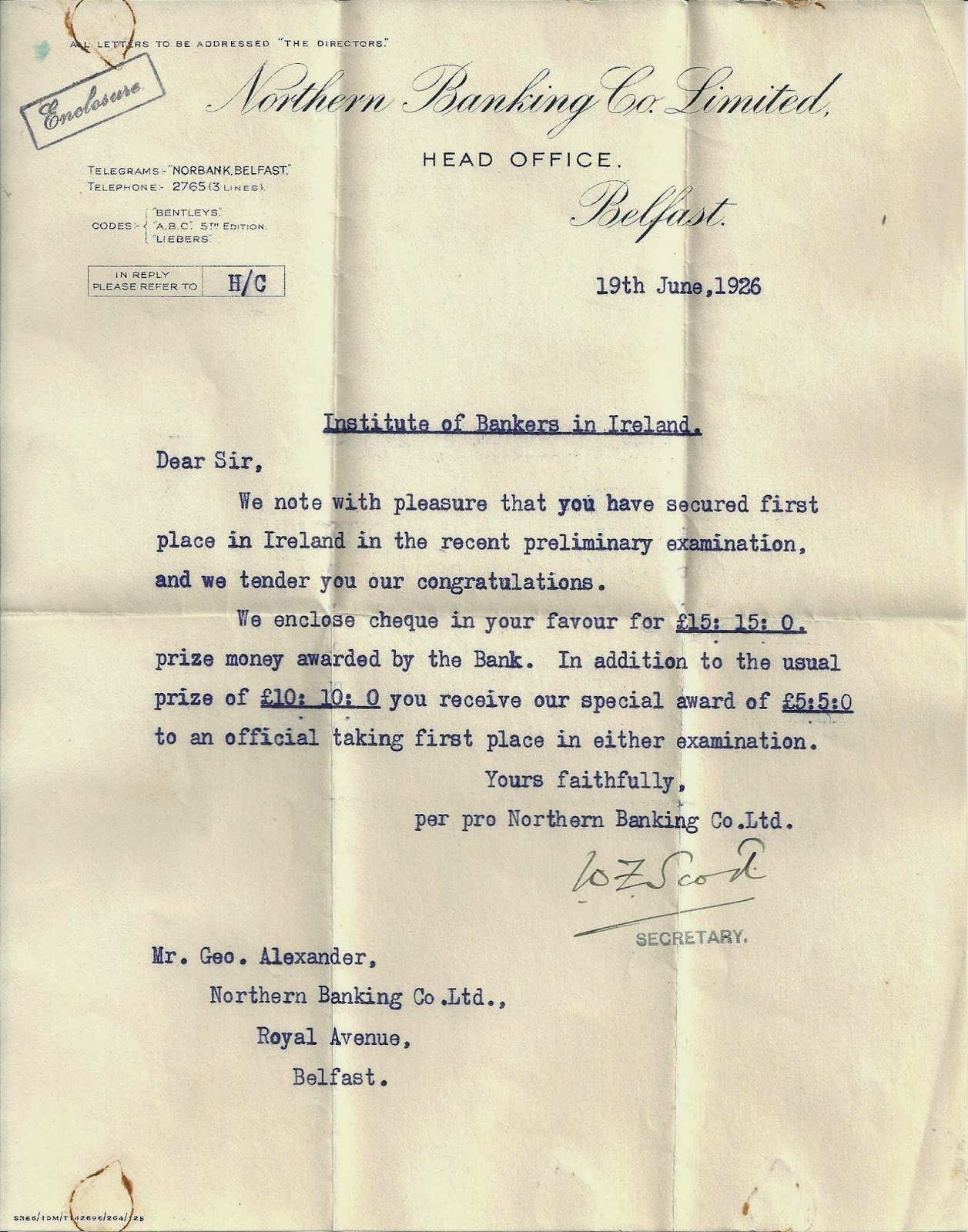 During 1930 Alexander applied to join the Irish Bank Officials' Association (IBOA) Medical Benefits Fund and was accepted in a letter dated 9th December 1930.  The letter was addressed to Alexander at Head Office. 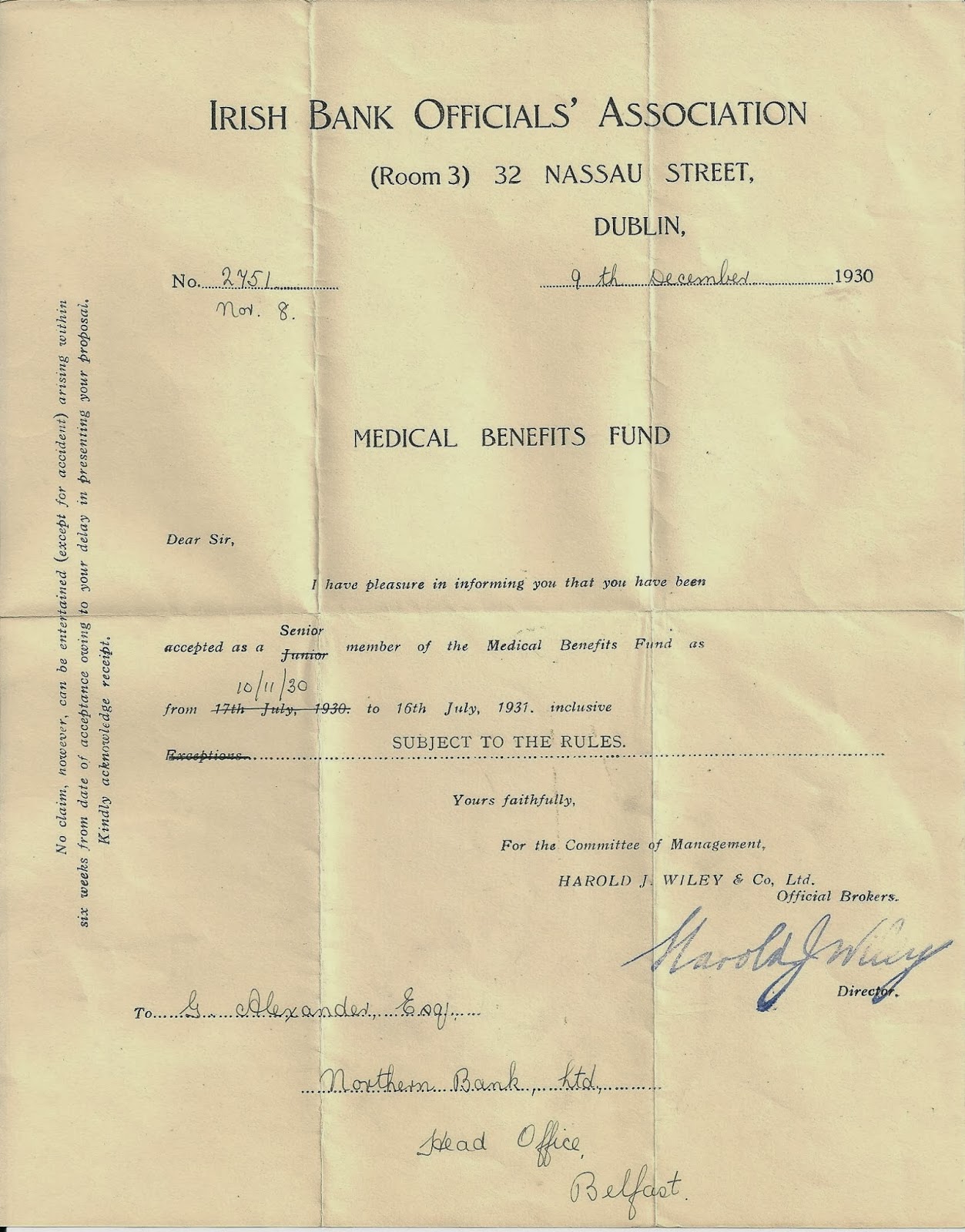 
On 27th August 1931, Alexander was found dead (poisoned by gas) at 5 Stranmillis Park, Belfast.  This was his sister’s residence.  The 1918 Belfast Street Directory records ‘F Alexander’ as living at that address.  He is buried in Belfast City Cemetry with his parents who had previously died in 1909 (Charlotte) and 1924 (Francis).

The Staff Magazine ‘The Link (Summer 1978)’ contains a photograph of Alexander appearing in the Northern Bank Cricket Team of 1928.

Additional family information has been kindly supplied by Charlie Alexander.