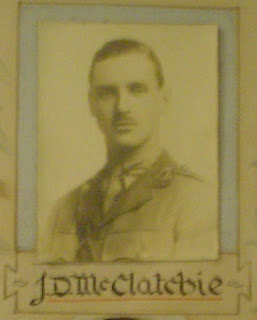 He was the son of James William McClatchie and Jane McClatchie.  James’ occupation is a Bank Manager.  In 1901, McClatchie was living in house 9, High Street, Lurgan.  By 1911 the family are living in house 13, Market Street, Lurgan, Co. Armagh.
On ‘Ulster Day’, Saturday, 28th September 1912, a John McClatchie signed the Ulster Covenant at the Town Hall, Lurgan giving his address as Albert Street, Lurgan.
McClatchie joined Northern Bank and worked in Bray as junior.  He was of Presbyterian faith.
Whilst in Bray, McClatchie volunteered and enlisted into the 4th Bn. RIR.  He saw service with the British Expeditionary Force, was then posted to the 8th Bn. RIR ending up in the 15th Bn. Royal Irish Rifles as a Lieutenant.  He was invalided once.

There was also a further son, Captain W A McClatchie MC.  The Belfast News Letter of 26th September 1917 reports: