He was the son of the Rev. William Henry Bailey MA and Eleanor O. Bailey of The Manse, Clogher (Clogher Presbyterian Church).
Following his education at Dungannon Royal School, Bailey would have joined the Belfast Banking Company around 1899 / 1900.

He was working in Head Office and had also worked in Ballymena and Portrush branches.
Bailey enlisted in the Public Schools Battalion and also served with the 2nd Bn. Highland Light Infantry and attained the rank of Major.

He is reported in the Belfast Banking Company 'Roll of Honour' booklet as being 'previously wounded' with his last known address as 'in France'. 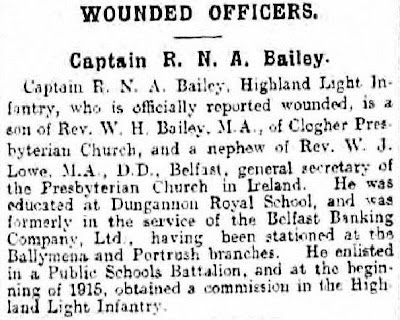 
Following his demobilisation after the Great War, Bailey returned to work eventually ending up as Manager of Whitehead branch.
Retirement came in 1946.
He died on 29th September 1957.