Captain William Martin Wright
was born on 23rd April 1884 and was the son of the Rev. William Wright and Charlotte McWilliams Wright nee Robinson of The Manse, Newtownards, Co. Down.

In 1901 William is living in house 3, Corporation South, Newtownards, Co. Down with his parents and 6 siblings, Hannah D, Charlotte M, Archibald R, Richard P, Alfred I and Matthew I.

Allowing for study and law examinations, Wright may have joined the Belfast Banking Company around 1906.  He was the bank Assistant Solicitor from 1910 to 1914.

His first theatre of war is recorded as France from September 1915. 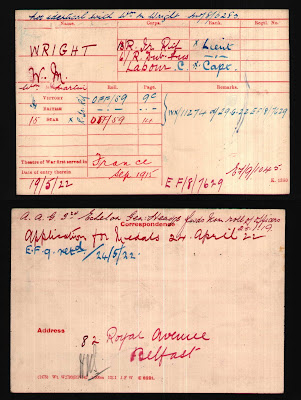 He was severely wounded on 29th June 1916.  The Belfast Banking Company 'Roll of Honour' booklet records Wright as having been 'previously wounded' with his last known address as 'Salonika'.

Following demobilisation, Wright may not have returned to the Belfast Bank.  He became a partner in McKinty and Wright, Belfast.

As an officer, William had to apply for his medals.  He applied on 24th April 1922 and was awarded the 1915 Star, the British War Medal and the Victory Medal.  His address at that time is recorded as 82 Royal Avenue, Belfast. 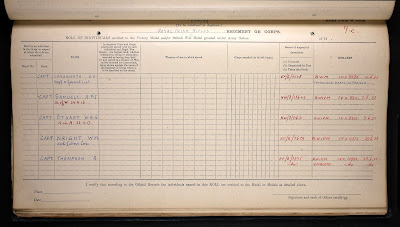 Wright also became involved in the Royal British Legion, becoming their Hon. Solicitor for 32 years, Chairman of the Newtownards branch for 30 years and President for 2 years.