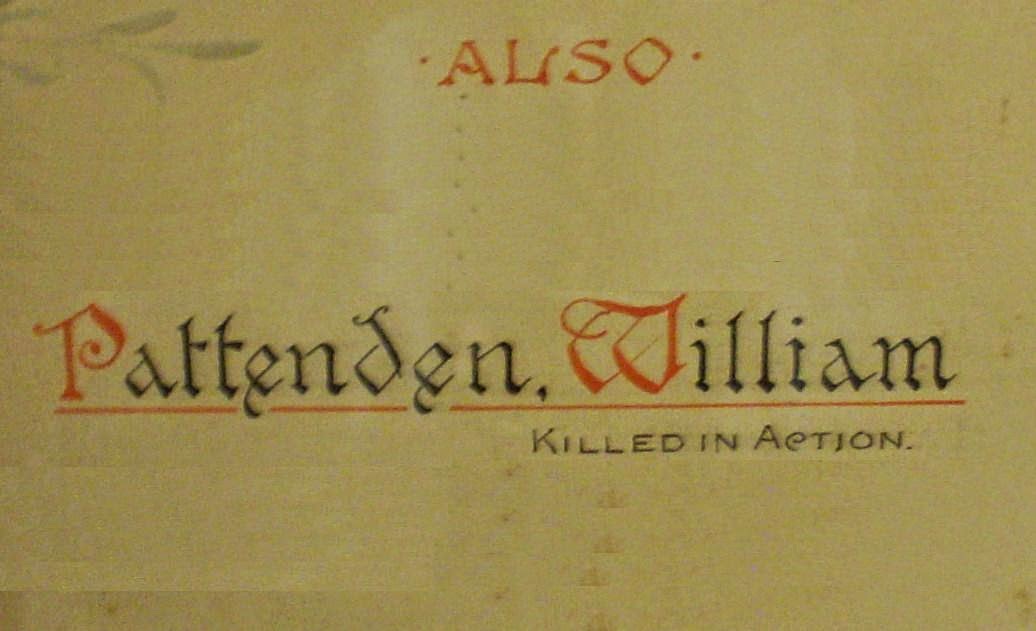 He was the son of Horace Pattenden and had 2 older brothers, George and Frank.

In September 1906, following his education, Pattenden volunteered and enlisted in the Royal Sussex Regiment at Chichester, England.  On his enlistment form, his next of kin is recorded as his father and the 2 elder brothers.  Their address is recorded as East Street, Hambleden, Kent, England.

He was given the Service Number of 8527.

William is described as being 5 foot 6 inches tall and weighing 141 lbs (10 st 1 lb) with a scar over his left eye.  He has dark brown hair, brown eyes and a fresh complexion.

Between October 1907 and December 1913 Pattenden was serving in India (Ambular, Rawalpindi, Gharial and Peshawar).

He transferred to the Army Reserve in December 1913.

According to the Army 'Statement of Services, Pattenden was formally discharged from the Army Reserve on 30th September 1914.

Over the years in service, his army medical form records him suffering from tonsillitis, having an abrasion on his left arm, having an abscess.  In 1913 at Rawalpindi, India he was vaccinated as a result of having 'vesicles'.  On his transfer to the Army Reserve, he was found to have a hernia.

Sometime after 1913 he moved to Belfast and joined the Northern Banking Company as a Head Office Porter and Caretaker.  The newspaper notice below records him as being married and living in 13 Third Avenue, Belfast.

The 1911 Irish Census records a 28 year old Gertrude Pattenden [*] residing in house 9, Norwood Street, Sandy Row, Belfast.  No other Pattenden's are recorded in that census.

War was declared at 11:00 pm on 4th August 1914 and as a Reservist, Pattenden was immediately recalled to the 2nd Bn. Royal Sussex Regiment.

The battalion immediately went to France as part of the British Expeditionary Force.
He was the first Northern Bank official to take part in the Great War.
The Northern Bank Centenary volume records Pattenden as having been reported missing presumed killed in August 1914.

The War Office Medal Index Card states Private Pattenden (Service Number 7711) as being as being Killed in Action at Ypres on 31st October 1914.  This is confirmed in the 'Ireland's Memorial Records' book (recorded as a Sergeant).

There is no evidence of a Third Avenue in Belfast.  This may be Third Street, Woodvale (Shankill), Belfast.

Pattenden is commemorated on the Ypres (Menin Gate) Memorial and also on the Shankill Road Mission Church War Memorial.

Pattenden was awarded the 1914 Star with clasp, the British Victory Medal and the British War Medal.  The Northern Bank Centenary volume quotes Pattenden as receiving the 1914/15 Star.  His official Medal Roll records him as being awarded the Victory, British, 1914 Star and Clasp.