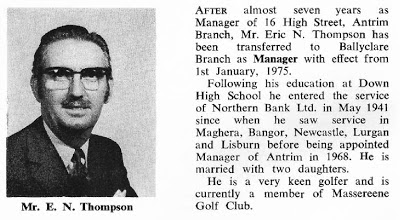 He resigned on 15th February 1944 for Active Duty.

His unit is recorded as the Pioneer Corps.  Promotion to Lieutenant from an Emergency Commission came in 1950 and he was granted the honorary rank of Captain (Royal Pioneer Corps).
On 1st October 1947 Thompson resumed duty with the Northern Bank at Head Office.  A transfer to Lisburn (1947) followed with further moves to Newcastle, Lisburn and Antrim.  In 1975 he was transferred from Antrim – manager to Ballyclare – manager.
The Staff Magazine ‘The Link’ (Summer 1981) records his retirement on 31st March 1981 with an article and a photograph.

THOMPSON, ERIC NELSON - September 28, 2013, peacefully, at Clonlee Private Nursing Home, loving husband of the late Joyce, formerly of Templepatrick, loving and devoted father of Anne and Karen, dear grandfather of Monika and great-grandfather of Lena-Marie.
A Service of Thanksgiving for his life will be held in Bairds Funeral Home, Antrim on Friday 4th October at 11.00 a.m., and afterwards to Belmont Cemetery. Family flowers only please.
Donations in lieu, if desired, made payable to Cancer Research, c/o Bairds Funeral Directors, 71 Church Street, Antrim, BT41 4BE.
Lovingly remembered and sadly missed by the entire family circle. You will always have a place in our hearts.