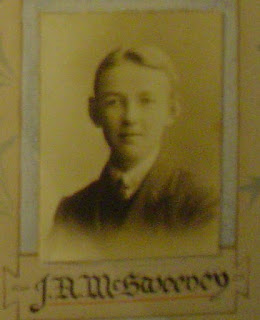 Trooper Joseph Alphonsus McSweeney
was born on 17th February 1900.  In 1911, McSweeney is boarding in a school at house 40.1, Castleknock, Dublin.  He was of Roman Catholic faith.

On 2nd April 1917, McSweeney joined Northern Bank and was posted to Dungloe branch.

McSweeney volunteered and enlisted into the North Irish Horse on 29th September 1917 and left the bank on 3rd October 1917.

He saw service in the Home Service prior to being discharged for being under age.