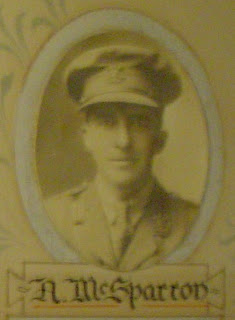 
In 1911, McSparron is boarding in house 21, St Lawrence Road, Clontarf West, Dublin.  He is recorded as a Bank Official.  A possible colleague, Joseph Dunlop Henderson (32 – Bank Official) is also boarding in this house.
On ‘Ulster Day’, Saturday, 28th September 1912, a number of Archie McSparron’s family signed the Ulster Covenant in Londonderry.
Whilst serving in Donegall Square, 32 year old McSparron volunteered and enlisted into the North Irish Horse as a Trooper.  He joined the British Expeditionary Force and was promoted first to a Lance Corporal before being gazetted as a 2nd Lieutenant in the 5th Bn. Leinsters.  Service was seen in the Somme 1916 and in Messines 1917.  Demobilisation came in February 1919.