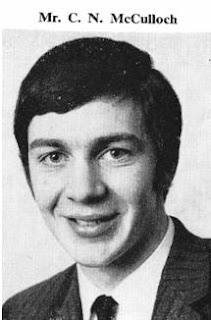 On 20 April 1982, Noel was killed along with a friend in a ‘no warning’ car bomb in the centre of Magherafelt.  An inadequate warning had been given.  He was a civilian bank employee. A native of Magherafelt, Noel was educated at Rainey Endowed School, where he displayed his sporting talents by being a member of the 1st XI at cricket and the 2nd XV at rugby.  He joined the Bank in 1968 and had served in Head Office, Falls, Willowfield, Newtownards and Magherafelt.

At the time of writing (2012), there is no memorial to McCulloch in Northern Bank.

It is with deep regret, sorrow and shock that the many friends and indeed the whole community of Magherafelt, learned of the tragic death of Noel McCulloch in the early hours of Wednesday, 21 April following a car bomb explosion in his home town a few hours earlier.

Noel had just returned home from a rugby tour with Rainey O.B. in the Bahamas where he was one of the most popular tourists.  Although unable to play because of injury, he contributed greatly by his assistance to the team and proved an excellent ambassador for the Club.

He entered the Bank’s service in 1968 and throughout his career Noel displayed the type of qualities that made him so popular throughout his short lifetime; enthusiasm and application always coupled with good humour and thoughtfulness.  He won the friendship of so many people and the high esteem in which he was held was borne out by the massive attendance at his funeral by all sections of the community.


Noel will be sadly missed by all who knew him and we extend our deepest sympathy to his mother and to all his family circle.

CAIN - A Chronology of the Conflict

The Irish Republican Army (IRA) carried out a series of attacks in Northern Ireland.  Wilbert Kennedy (36) and Noel McCulloch (32), both Protestant civilians, were killed in a bomb blast at the Diamond, Magherafelt, County Derry.  An inadequate warning had been given.  A further 12 people were injured in the attacks. Bombs exploded in Armagh, Ballymena, Belfast, Bessbroke, Derry, and Magherafelt, and caused an estimated £1 million pounds in damage.