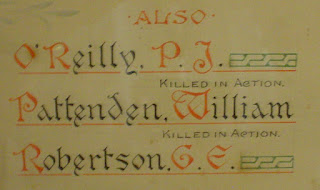 The family were of Roman Catholic faith.
On 31st January 1912, O’Reilly joined Northern Bank at Oldcastle branch.  A transfer to Head Office followed in 1914.
In October 1914, he volunteered and enlisted for the ‘duration of war’ into the 77th Siege Battery, Royal Garrison Artillery as a Bombardier with Service Number 63170.  He may also have seen service in the Royal Irish Regiment.
O’Reilly was killed in action on 19th/20th September 1916 aged 21.  He is buried in the Couin British Cemetery, France.
He was awarded the British Victory Medal and the British War Medal.

The National Archives of Ireland released a copy of O'Reilly's 'informal' will signed on 22nd March 1916.  He left the 'whole of his property and effects' to his brother, Edward O'Reilly, Bowelk, Ballybay, Co. Monaghan, Ireland.  Edward was the 26 year old (in 1911) quoted above.


Informal Will of P J O'Reilly