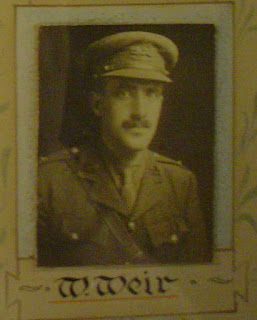 Lieutenant William Weir
was born in Ballyhill, Dromore on 11th November 1887.  He was the son of Margaret Jane Weir.  In 1901, the family lived in house 31, Dromore Street, Ballynahinch, Co. Down.  He was of Presbyterian faith.
On 12th December 1904 he joined Northern Bank at Head Office.  Transfers followed to Grafton Street (1905), Hillsborough (1906), Dungloe (1909), Head Office (1910) and Lisburn (1910).  In 1911, Weir had moved to house 23, Burmah Street, Ormeau Ward, Belfast.
On 12th February 1915, whilst based in Lisburn he volunteered and enlisted into the Honourable Artillery Coy (Infantry) as a Private.  He served in the British Expeditionary Force in 1916, was promoted to Lance Corporal, then Corporal, then Lance Sergeant, then Sergeant and then went to Cadet School.  He was later gazetted as a 2nd Lieutenant in the Kings Own Royal Lancaster Regiment before being posted to the 2nd Kings Own Royal Lancaster Regiment.   Subsequently he was promoted to Lieutenant.  Weir saw service at Macedonia, Army of Occupation Chanak, Dardanelles and Bullecourt.  He received a slight gunshot wound to the left shoulder.  Demobilisation came in November 1919.  He was awarded the British Victory Medal and the British War Medal.
Following demobilisation he rejoined Northern Bank on 1st December 1919 in Lisburn.  In December 1919 he married a Miss Johnston of Lisburn.  Transfers followed to Saintfield (1923), Antrim (1924), Limavady (1929), Donegall Square (1936), Royal Avenue (1941) and Donegall Square – Manager (1943).

The Staff Magazine ‘The Link (August 1981)’ contains a photograph of Weir in a 1913 Northern Bank Staff Golf outing.

Weir is remembered on a memorial in Railway Street Presbyterian Church, Lisburn.
Posted by Gavin Bamford