was born on 30th May 1898 at Knock, the son of James Tate, schoolteacher and Bella Tate nee McGowan.  The birth registration spells the family surname as Tate.

Bella died aged 41 from influenza and acute pneumonia on 11th December 1898 at Knock.

In 1901, Hugh is living in house 40, Knock Road, Pottinger Ward, Belfast with his grandfather Hugh William, his grandmother Mary, his father and a servant Catherine McQuade.

In 1902 the house has been named by the owners as Belgrave Villa, Knock.

By 1911 the property is known as house 35, Knock Road, Pottinger Ward, Co. Down.  Hugh is living there with his father James, a house keeper Margaret Todd and a boarder Henry Huber.  The family surname is now recorded as Tait.

Hugh would have joined the Belfast Banking Company around 1914 and worked in Head Office. An uncle, Robert Moore signed the necessary insurance security from Bankers Guarantee Trust for Hugh.

In September 1914 Hugh enlisted into the 8th Battalion Royal Irish Rifles with Service Number 8/13705 as a Private.  His first theatre of war is recorded as France from 5th October 1915. 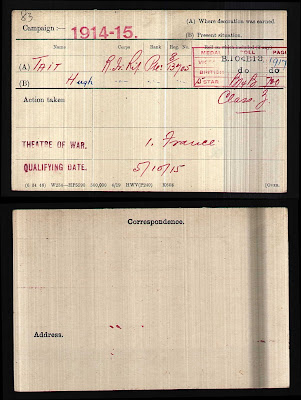 
The Bank 'Roll of Honour' booklet records his rank as a Cadet serving with the 17th Battalion Royal Irish Rifles. 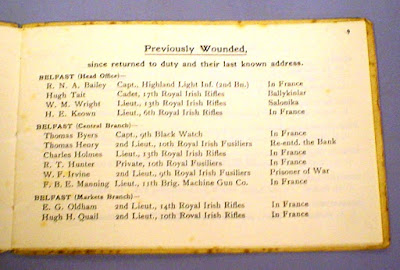 
The Belfast Banking Company 'Roll of Honour' booklet records Tait as having been 'previously wounded' with his last known address 'Ballykinlar'. 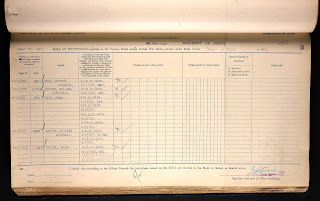 
In 1922 Hugh went to court, Belfast Equity Sessions in a dispute over his fathers house and his uncle & aunt who Hugh had asked to stay in the house whilst he was overseas.  The Moore's were the executors for Hugh's fathers will.  The court instructed the Moore's to leave the property 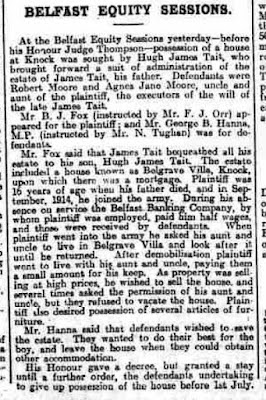 
A Hugh J Tate, 49, died on 3rd December 1947 and is buried in Belfast City Cemetery, Glenalina Extension.  Anna Elizabeth Tate lies in the same grave plot.  She died aged 60 on 5th August 1960.  Their address at date of death was 275 Shore Road, Belfast.


It is probable that the family home is now numbered as 64 Knock Road, Belfast and is described in the ‘Environmental Statement of the A55 Knock Road Widening Scheme’ published by the DRD in 2009: 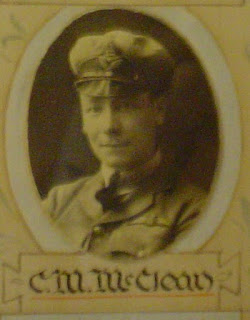 In 1901, Charles was living in house 7, Railway Place, Coleraine, Co. Londonderry with his parents, 1 sibling: Mary and 2 servants: Martha Rosborough and Catherine Byrne.  The family were of Roman Catholic faith.

By 1911 the property was described as house 5, Railway Place, Coleraine, Co. Londonderry.  Charles was living with his mother, 4 siblings; Kathleen, Monica, Patricia and Clare and 2 servants; Agnes Brislan and Ellen Bonner.  Mary does not feature on the 1911 census.  She would have been 10.  Kathleen is recorded as a 10 year old.

Charles entered Northern Bank in March 1916 at Castlewellan.  In November he was recorded as being in Head Office.

Whilst based in Castlewellan, Charles volunteered and enlisted into the Royal Flying Corps (RFC). His address at that time was Westbrook House, Coleraine.

His Service Record in the RFC follows: 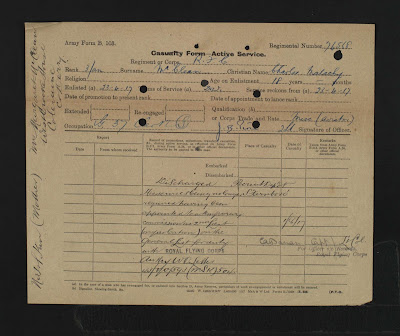 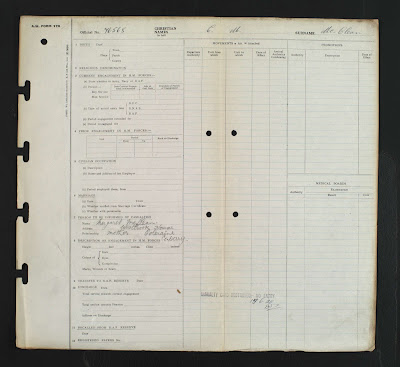 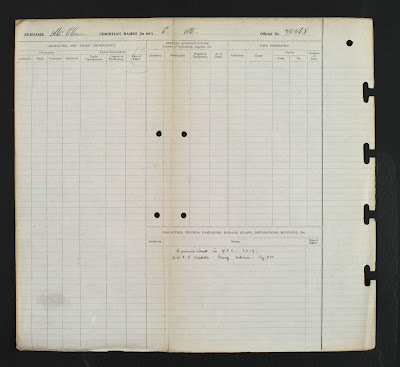 Charles saw service with the British Expeditionary Force, the Defence of London, Ypres and Lens 1918.   He was promoted to Lieutenant and then Captain.  He received a gunshot wound when his ‘machine’ was shot down.

Charles Service Record indicates that he may have continued on in the RAF Reserves.  His rank is shown as F/O (possibly Flying Officer) in 1923. 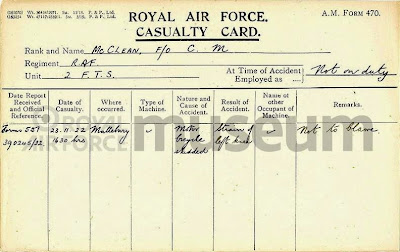 The London Gazette dated 2nd September 1924 records F/O McClean as being transferred from A class to C class.

The Sheffield Daily Telegraph of 19th January 1923 reports that Lt C M McClean and 2 others were fined for assaulting a proctor in Cambridge. 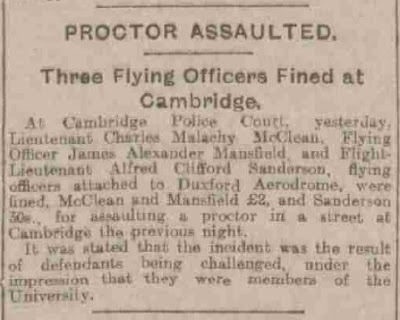 
In 1929 he relinquished his commission on completion of service.  The following information comes from the RAF Museum: 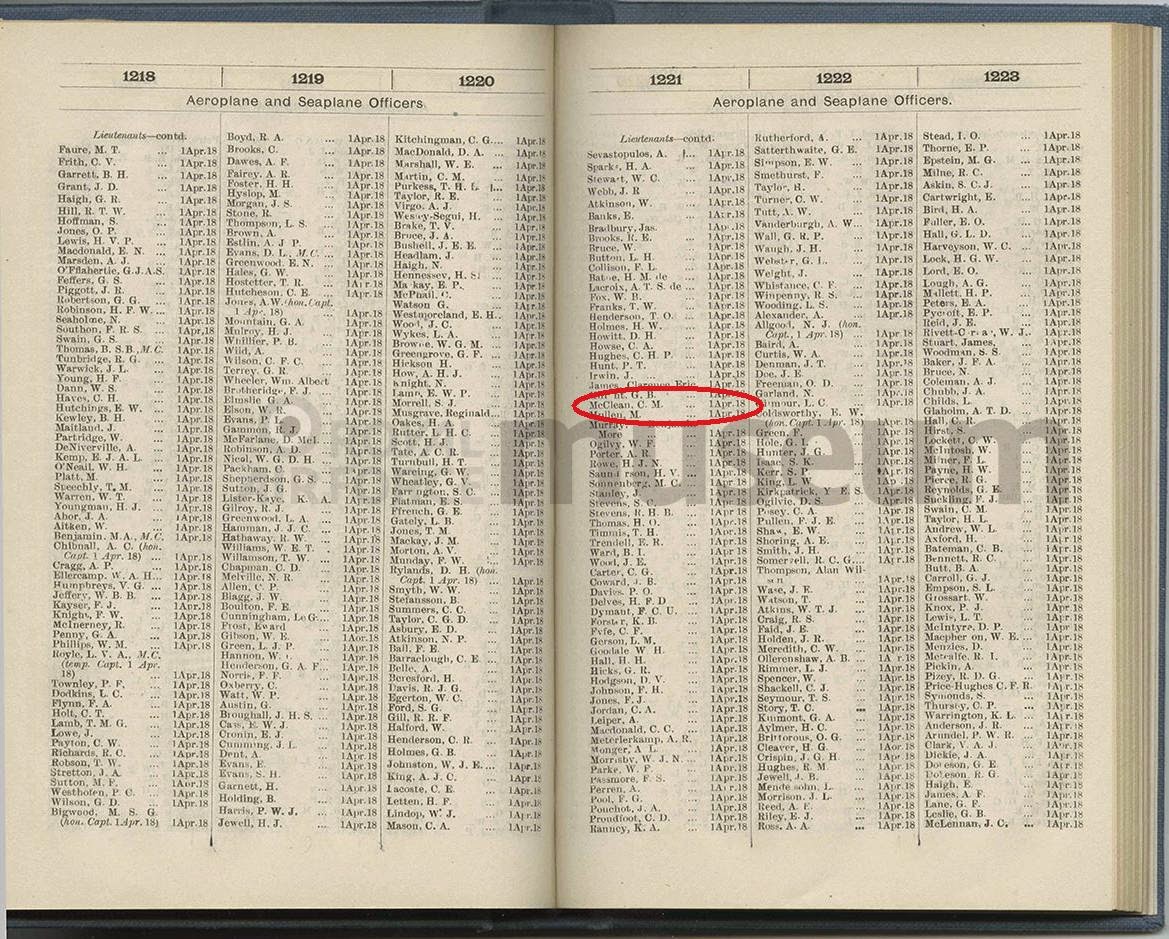 Capt Charles McClean died on 6th April 1941.  The Londonderry Sentinel dated 8th April 1941 reports his death.  He is recorded as dying at his residence, the Provincial Hotel, Foyle Street, Londonderry. 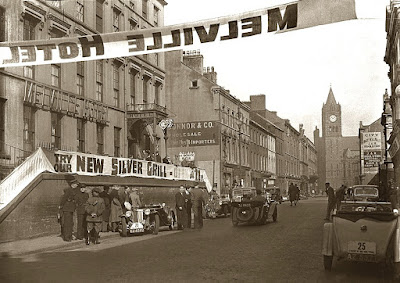 Photo courtesy LibrariesNI who write "Foyle Street looking towards the Guildhall.  Buildings line both sides of Foyle Street and on the left is the Melville Hotel.  This hotel was one of the four situated on Foyle Street in the 1930’s – the Metropole, the Foyle, the Provincial and the City."

Following the sale of the Northern Bank former Head Office at 16 Victoria Street, Belfast, it was necessary to remove and re-locate the Northern Bank War Memorial. This Memorial which bears the names of Officials who served in the 1914-1918 and the 1939-1945 wars has been placed beside the Belfast Bank War Memorial in Waring Street branch, Belfast.

The Dean of Belfast, The Very Rev. S B Crooks, M.A., T.D., kindly offered to officiate at a Dedication Service which was held in the Branch on 7th December 1977.

The service, which was attended by ex-servicemen and their guests, was followed by dinner in the Ulster Reform Club. As it has been decided to discontinue the annual dinner the evening was naturally filled with nostalgia.

The Staff Magazine ‘The Link’ (Spring 1978) contains photographs of veterans and guests of the Ex-Servicemen's Association. A few names are known. Please help by commenting. 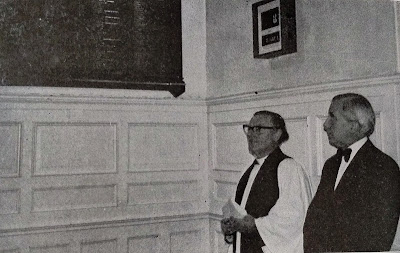 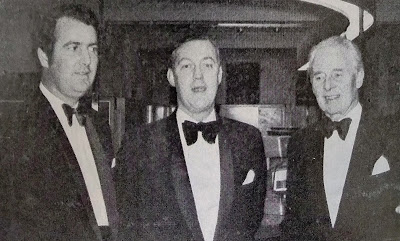 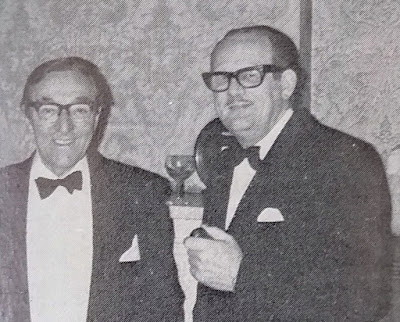 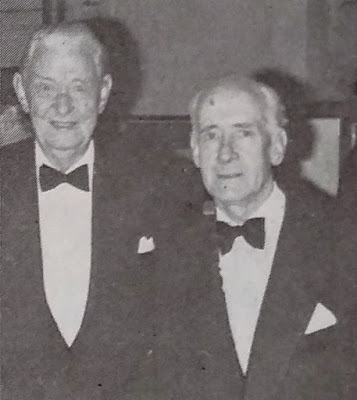 William and Margaret had married on 10th July 1894 at Newry Parish Church, Co. Down.

In 1911 (census day was 2nd April) William and Margaret lived at house 18 Bridge Street, Cootehill with their 2 sons Edwin and Geoffrey.

Another brother, Tom and a sister Eve lived with their grandfather, William White at  6 College Square, Camlough.

Louis was educated at the Masonic School, Richview, Dublin where he excelled at sport becoming captain of rugby and cricket.  He was orphaned at the age of 17 whilst at school.

".... He was befriended by a man called Raymond Brooke, of the Brookeborough family, a Grand Master in the Masons and Managing Director of a wine importing company in Dublin.  My father must have gone to stay with him in Sligo after leaving school when his mother died and prior to joining the Bank. ..... After arriving in Belfast to join the Bank, I believe he lived with his married sister Eva on the Upper Newtownards Road. .... Louis did mention to me at one time that had he pursued it, he could have had a career in the wine industry, but never mentioned Mr. Brooke.  I have Brooke's name from an inscription in a book which he gave to my father, "as a memento of the game against B.R.A." Signed-- R.F. Brooke, and a little bit of "Googling" revealed the above information. ...."

On 17th July 1929, White was living in 'Gibraltar Cottage', Sligo when he joined Northern Bank at Head Office.

Whilst in Belfast, he played for the North of Ireland Rugby Football Club.

Transfers followed to Antrim Road (1932) and Head Office (1935).
White joined the 3rd Anti-Aircraft Brigade and was ‘Called up on Active Service’ on 24th August 1939 into the 8th Anti-Aircraft Regiment.

He married Connie on 6th October 1939, just 1 month after war was declared.  As was the custom (bank rules) at the time, it is probable that as a junior and not earning very much, Louis would have had to request permission from the bank Director's to get married.  Presumably the start of the war helped his case.

His rank and promotions were Bombardier, Lance Sergeant, Sergeant, 2nd Lieutenant, Lieutenant and Captain.  His Service Number (Officer) was 163000.

White served at Dunkirk and in India and Burma from 1942 to the end of the war. 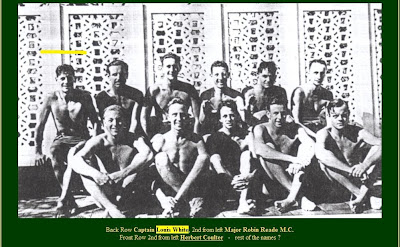 Michael White was born in 1943 and was educated at Coleraine Inst when his father was based in Portrush branch.
White resumed duty with the Northern Bank on 15th November 1945 at Head Office.  Transfers followed to Donegall Square (1945), Portrush (1956), Markets (1962) and High Street (1967). 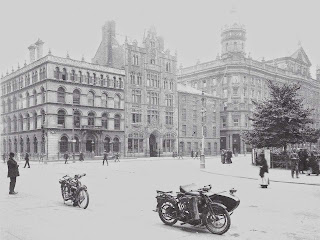 
He continued his Army career in the Territorial Army rising to the rank of Major.  Retirement from the Army came on 9th December 1961 having exceeded the age limit.

Louis retired on ill-heath grounds in 1971.  In 1972, he and Connie joined their son, Michael and his wife in Auckland, New Zealand.

Louis is remembered on his school roll of honour:


The Staff Magazine ‘The Link (Winter 1972)’ contains a photograph of White.
Connie died on 10th August 1980 and Louis on 27th January 1982.  They are both buried in Auckland, New Zealand.
Acknowledgements to Louis White's son, Michael for additional information.
Posted by Gavin Bamford 3 comments: