Smyth, Robert - "Missing from the Roll of Honour"

He was the son of George Rock Smyth and Elizabeth Smyth.  His surname is sometimes recorded as Smythe.

Following his education, Smyth may have joined the Northern Banking Company around 1893 (about 17 years old).

In 1901, the family were residing in house 11, Cullybackey Road, Ballymena, Co. Antrim. Robert describes his occupation as a Bank Clerk. His father is an accountant and another brother is a clerk. He also has 2 sisters.

By 1911, the family address is now recorded as house 16, Cullybackey Road, Ballymena, Co. Antrim. Again, Robert is described as a Bank Clerk. The sisters still live at home but brother George is not recorded there on census day.

It is probable that Smyth volunteered and enlisted in 1916 into the 1st Bn. Welsh Guards as a Guardsman. His service number was 1820. He would have been aged 40 at this time.

Smyth records that he served in France from 26th September 1916 till April 1919 as a Corporal, Lance Sergeant and then a Sergeant.

Smyth was awarded the British War Medal and the Victory Medal.  His Medal Index Card is shown below: 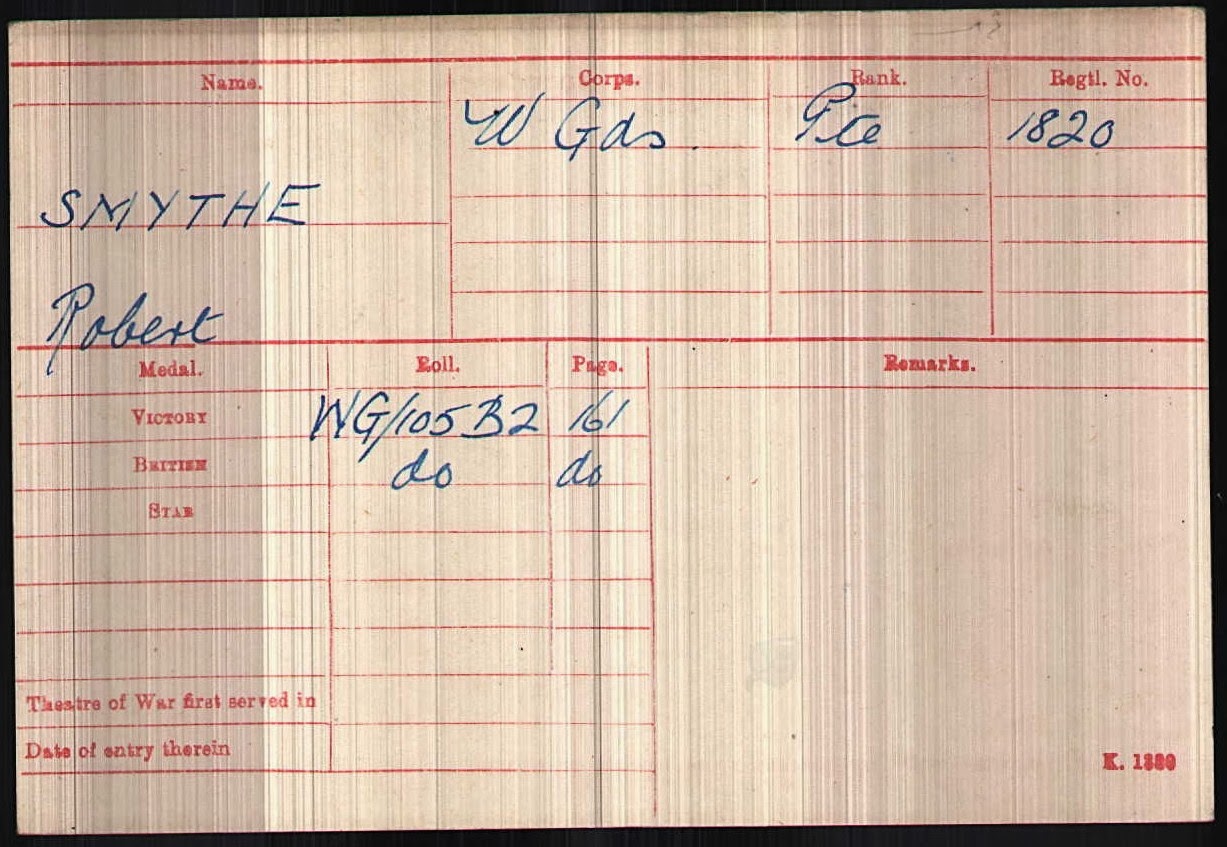 Following his demobilisation, Smyth applied for an Army Pension and completed the army document (below) known as a 'Statement By A Soldier Concerning His Own Case' [*] on 17th January 1920.  He stated that he had 'varicose veins and debility' and had also been treated in Ballymena Cottage Hospital for appendicitis.

In Section 7 of the document, Smyth records his employer before joining the army as the Northern Banking Company Limited, Belfast.

[*]  The document was obtained by Alan Rosborough who is a researcher for the Cullybackey & District Historical Society. 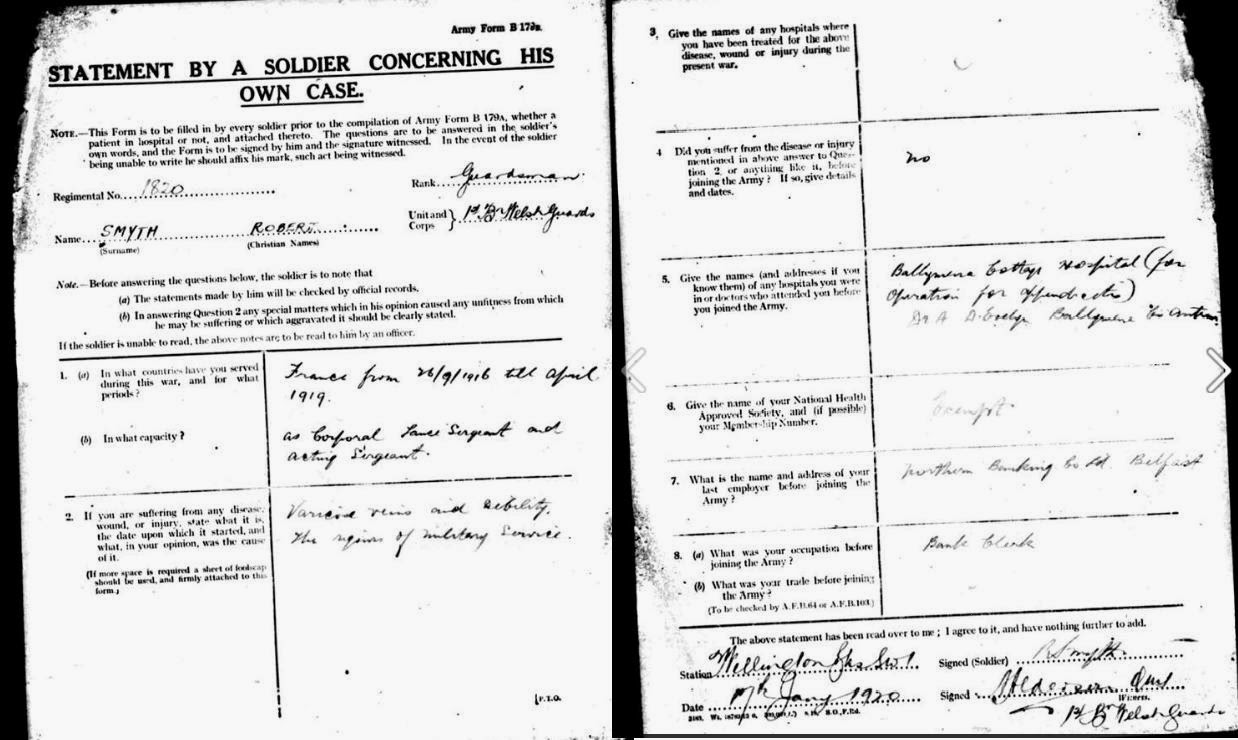 E D Hill in his book, 'Northern Banking Co. Limited Belfast - 1824 - 1924 Centenary Volume' does not record a Robert Smyth as serving in the Great War.  This is evidenced on page 230 (below): 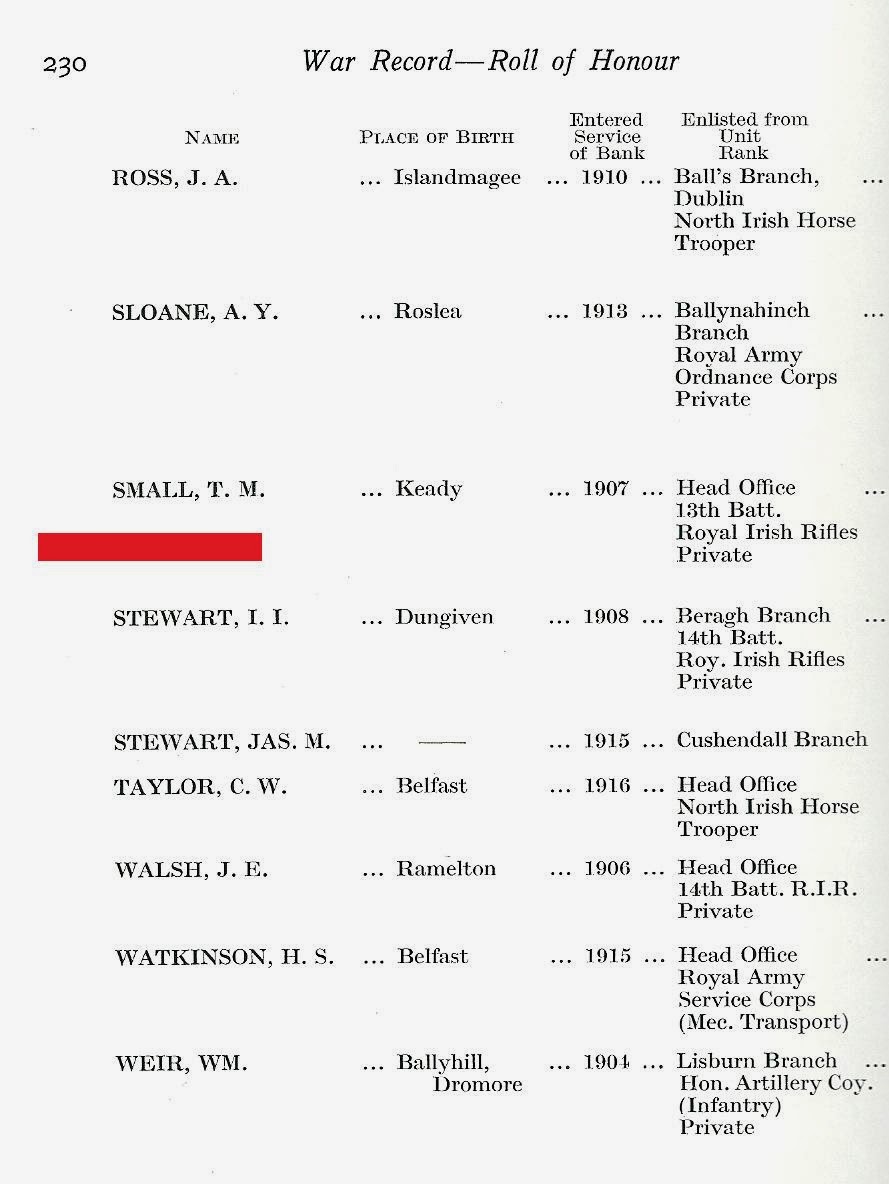 The above page records the names on the brass Roll of Honour (see below):

Missing from the Northern Bank 'Roll of Honour'

We have 2 documents that record Robert Smyth as a Bank Clerk (Irish Census 1901 & 1911).  The returns would have been completed by the head of household, George R Smyth.

We have the Army Pension form completed by Robert Smyth in 1920 stating Northern Banking Company as his pre-war employer.

We have the Centenary Book published in 1925 that omits Robert Smyth from the list of officials who served.

We have the actual Roll of Honour with the name of Robert Smyth omitted.

In response to a previous request by Alan Rosborough, the writer was able to visit the archives of Northern Bank (with their permission) and examine the Staff Record books.  No record was found in the the early 20th century books.  If he had joined the bank in 1893 it is possible that a further search may find him.

Without the staff record, it is not possible to tell if he rejoined the bank on demobilisation.

Why would E D Hill not have Smyth recorded in his book?  There are many men who did not return to banking who are included in the book.  We don't know when the Roll of Honour was made and installed in the bank Head Office.

Robert had a brother George who was not recorded in the family home in 1911.  A further search of the Irish Census 1911 has discovered a 39 year old George Smyth residing in house 2.1, Charlotte Street, Ballymoney, Co. Antrim.  Age, religion and occupation (now a bookkeeper) match up. George and his wife, Emma Jane Smyth have 2 daughters and a son George Hill Smyth (age less than 1).

Further research on this part of the family may help find out the story of Robert Smyth.