Squadron Leader Roderick Alexander McKitrick DFC (later Colonel)
was the son of George Evelyn McKitrick (born 2nd August 1879).  Educated at Campbell College, George was in Lower VI in 1895.
In 1901, the family lived in house 122.1 Duncairn Street, Belfast.  By 1911 they had moved to house 53, Antrim Road, Belfast.  George is described as a Bank Clerk and works for the Belfast Banking Company in Head Office.
Roderick A McKitrick was probably born around 1920 and followed his father into the Belfast Banking Company.

Roderick McKitrick flew also with No. 44 and No. 138 Squadron.  With No. 138 Squadron he was involved in dropping of Secret Agents in SOE operations. During Operation Draughts & Backgammon with Short Stirling Mk IV NF-J, LK200 in the night of 8th/9th September 1944, the plane hit the cable of a barrage balloon at 02.50 hours over Texel, the Netherlands and crashed.
Of the crew Flying Officer Thomas Roger Court, Flying Officer John Hulme and Flying Officer George Evans Fletcher Walton died in the crash.  They later were buried at the cemetery at Den Burg, Texel, The Netherlands.
Squadron Leader G.M. Rothwell, Flying Officer McKitrick, Pilot Officer Shaw and Flight Sergeant R.W. Wilmott were taken prisoner. Roderick Alexander McKitrick was imprisoned at POW camp L1 (Staluft 4B/L1) at Barth together with Rothwell and Shaw.

Flying Officer McKitrick was awarded the Distinguished Flying Cross (DFC) on 23rd May 1944 (published without citation).

The website, harringtonmuseum.org.uk records McKitrick's plane crash over Holland.  Similar detail as above.
Following demobilisation, it is not clear if McKitrick returned to employment in the Belfast Banking Company.
However, the London Gazette continue the reporting of a R A McKitrick DFC as follows: 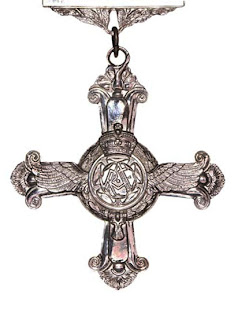